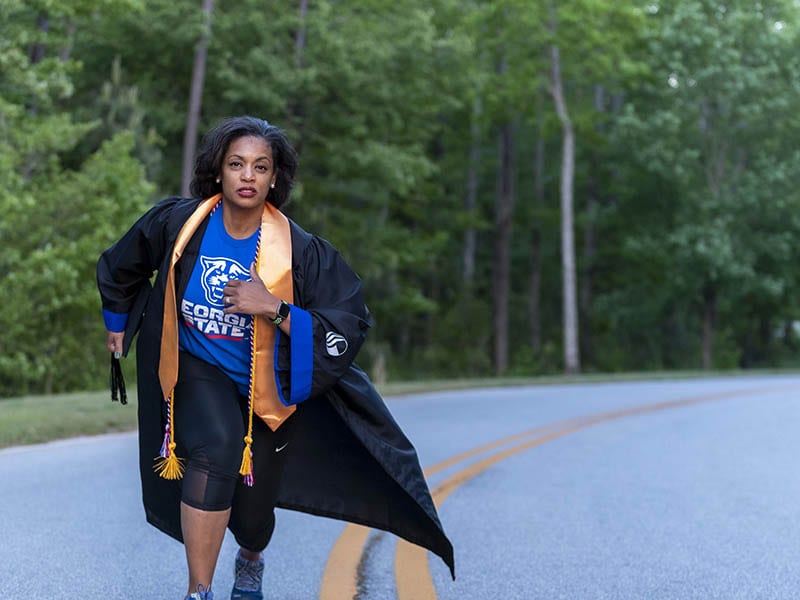 Use Scan QR Code to copy link and share it
Chasity Holstick – a Mom, Veteran and Marathon Runner Who Returned to College at Age 42 – Completes her First Degree and Fulfills a Long-held Goal.
By Kysa Anderson Daniels

COVINGTON, Ga.—As a marathon runner, Chasity Holstick enjoys the elation of crossing a finish line after a focused and steady race.

Her journey to complete college has required similar tenacity, and she is starting to feel the joy.

Holstick was 42 years old when she nervously registered for a single class at Georgia State University’s Perimeter College in 2018. She needed just 10 courses to complete requirements for an associate degree, but work and family demands (she’s a wife, involved mother of three and community and church volunteer) required her to take a measured pace.

“I started slowly but surely, one course a semester, getting my feet back into it,” she said of returning to college after more than 20 years.

Holstick’s persistence will pay off when she completes her associate of arts degree as part of Perimeter’s spring class of 2021.

About 2,000 degree candidates are slated to graduate from Perimeter College in spring and summer after following pathways ranging from health science professions to engineering and business administration. Holstick followed the sport management pathway at Perimeter.

Holstick grew up as one of four children and will be the first sibling to graduate from college. She credits her mother for “praying her through.”

“She always wanted to see her children go to college, and I always said, ‘I’m going back,’” Holstick said.

Her own children were a big influence, too. Holstick remembers feeling like a hypocrite as she constantly stressed the importance of school to them.

Holstick tried college just after graduating from high school in South Carolina. She accumulated a year’s worth of credits, but ran out of money, so she left and joined the Army National Guard before getting married and becoming a stay-at-home mom.

Three years ago, with her oldest child graduating from college and her youngest in pre-kindergarten, Holstick finally made it back to the college classroom.

Being a “seasoned student” was sometimes nerve-racking — and humorous — she said,  recalling the time a professor called on her to help him explain what cast iron skillets were to the class of mostly younger students.

“I guess because I was the oldest in the class, he would always reference me, “Oh, Chasity, you remember that,’” she said, laughing.

Holstick coupled her studies at Perimeter with a part-time position as recreation services supervisor for Georgia State’s Newton Campus, where she still works to help develop student recreation programs.

Her interest in marathons emerged when she turned her routine neighborhood walks into short jogs. She started running 5K races and ran her first full marathon of 26.2 miles in Savannah four years ago. She’ll run her fourth marathon in November.

Following graduation, Holstick will transition to Georgia State’s Atlanta Campus, where she will pursue her bachelor’s degree, with plans to major in exercise science. One of her interests is working as a health and wellness coach so she can inspire others to reach their goals.

Perimeter College will host its spring commencement May 11 as a limited-ticket event at Georgia State’s Center Parc Stadium.