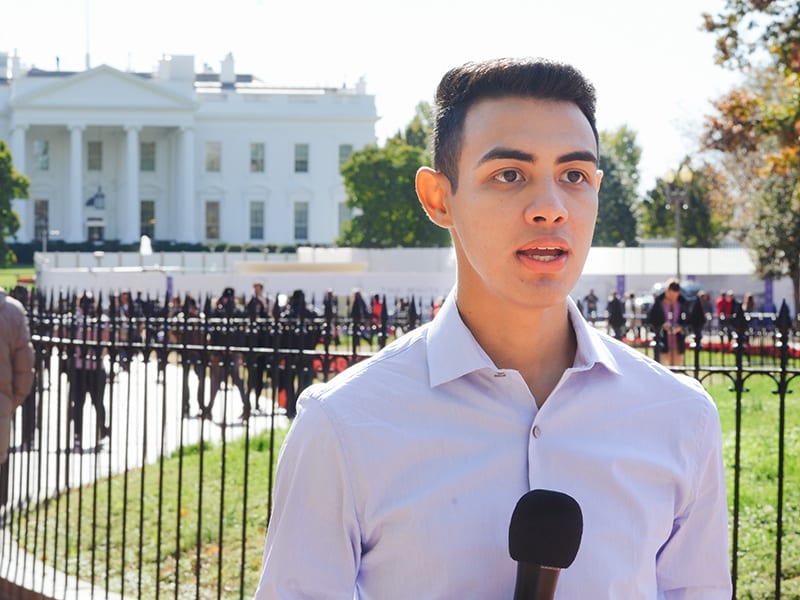 In high school, Kevin Sanchez Farez went to a demonstration protesting the death of Alton Sterling, a 37-year-old black man who was shot dead at close range by two police officers in Baton Rouge, Louisiana.

Farez, who went to the protest to take photos, said he instantly felt a connection at the demonstration.

“I knew there was something there,” Farez said. “I think that’s when my interest in journalism really blossomed. I really wanted to document what people had to say about these very emotional events.”

Farez started by taking photos at protests. When he got to Georgia State University, he transitioned into video and then broadcast journalism.

Despite his natural interest in the profession, Farez said he was still apprehensive about the industry. He felt that his voice had to sound a certain way or he had to have a certain look or sexual orientation.

His perspective changed during his sophomore year when Don Lemon, a television host for CNN who came out as gay in 2011, visited Georgia State.

“When I was first starting out, I felt like I had to suppress so much of my identity so I could fit into this mold and that was so soul sucking,” Farez said. “My sophomore year, it really clicked for me that you can be a person of color and you can be gay without that being a detriment to your career. You can be yourself.”

With a renewed sense of determination, Farez became a news director for the student-led Panther Report News in his sophomore year, and earned an internship through the Dow Jones News Fund which provides opportunities for students of diverse backgrounds interested in journalism careers.

At NOAA, Farez created videos related to the organization’s ocean awareness campaign including videos about sharks in the Galapagos.

“The experience has really illuminated the things that I’m really interested in,” Farez said.

Farez said he wants to continue to produce stories that offer platforms for people to speak about their experiences.

In June, he will join NPR as a visual newscast intern. In August, he will enroll at the Columbia University School of Journalism to pursue a master’s degree.

“I really enjoyed my experience here and all the little things Georgia State taught me like stacking a show, writing a script or making a small connection here or there,” Farez said. “It’s all the small things that I’m really glad I experienced. Coming here gave me a well-rounded perspective of the work that goes on behind the scenes.”

Farez said he hopes to inspire others from similar backgrounds.

“I hope I can be some sort of role model for others who are like me,” he said. “That’s why I try not to hold back on aspects of my identity.”