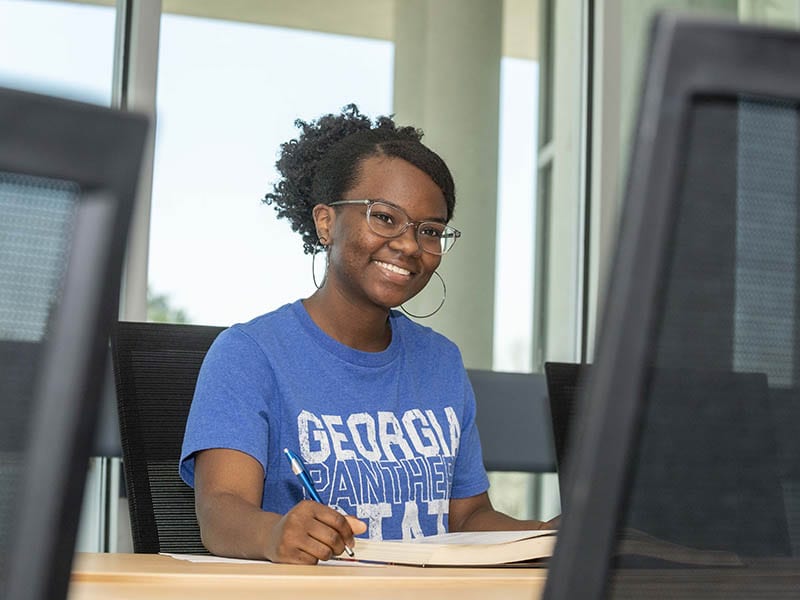 Breedlove, who graduated from high school when she was 16, is a computer science student at Georgia State University’s Perimeter College with a 4.0 grade point average.

In 2019, she participated in the Disney Dreamers Academy in Orlando, Fla., as one of only 100 students selected from thousands nationally. The four-day leadership conference targets students with “ambition, excitement and hopes for the future.”

A few weeks ago, Breedlove attended an invitation-only technology forum alongside science, technology, engineering and mathematics (STEM) students from universities, including Purdue and Ohio State.

But Breedlove sees her selection last month as a Jack Kent Cooke scholarship semifinalist as perhaps the most impressive addition to her list of successes. Winners of the competitive award, expected to be announced in late April, are judged on factors such as leadership, service to others and academic ability. It is the largest private scholarship for  two-year and community college transfer students in the country.

“Being a semifinalist for this award is such a huge accomplishment, and seeing my name among the list of other semifinalists was surreal,” Breedlove said.

Breedlove’s drive to achieve is rooted in family. The youngest of four children, she says she grew up with a loving mother who homeschooled them until high school and a doting father who exposed them to nature and adventure.

As the “baby” in the family, Breedlove said she benchmarked her progress off that of her twin sisters and brother. She started reading at age 2, partly because she was absorbing the lessons her mom, a former prekindergarten teacher and current educator, taught her siblings. Later, Breedlove completed the first and second grades in one year.

“My siblings push me to be better and to go further because we’re all very supportive of each other,” she said.

Breedlove and her siblings grew even closer last year as they endured the coronavirus pandemic and their parents’ unexpected separation. Although it has been challenging, Breedlove said she now communicates more with her father and has been more helpful to her mother, who is enrolled in graduate school.

“Of course, nobody wants their family to separate,” Breedlove said, “but for me, it’s been more of a positive than a negative experience because I’ve grown in a lot of different ways that I didn’t even know I needed to grow.”

As a Perimeter student, Breedlove participates in the Honors College and Phi Theta Kappa, and is vice president of communications for the Women in Technology group on the Alpharetta Campus. She also works as a student assistant in Perimeter’s Honors College office.

“Not only has April maintained a perfect GPA in her time at Perimeter, she is a calm and creative problem-solver and a real team player,” said Lauri Goodling, assistant professor of English and Honors College associate dean for Perimeter College. “She has a warmth and kindness to her that is just about unmatched.”

Off campus, Breedlove is heavily involved in ministry at her church and volunteers at a nonprofit food pantry, helping to stock shelves and load food into recipients’ cars.

One of Breedlove’s goals is to start her own nonprofit.

“I dream of creating a program called Code Cuisine, where I will teach kids the fundamentals of computer coding in exchange for food pantry donations,” she said. “I envision Code Cuisine becoming a program that will benefit people all across the country.”

After graduating from Perimeter College in May, Breedlove will transfer to Kennesaw State University and continue studying computer science. She hopes to work for The Walt Disney Company as a software engineer.

Each recipient chosen for the Jack Kent Cooke scholarship will receive up to $40,000 per year for up to three years to complete their bachelor’s degree. Since 2002, the JKC Foundation has awarded  21 Perimeter students  the scholarship.