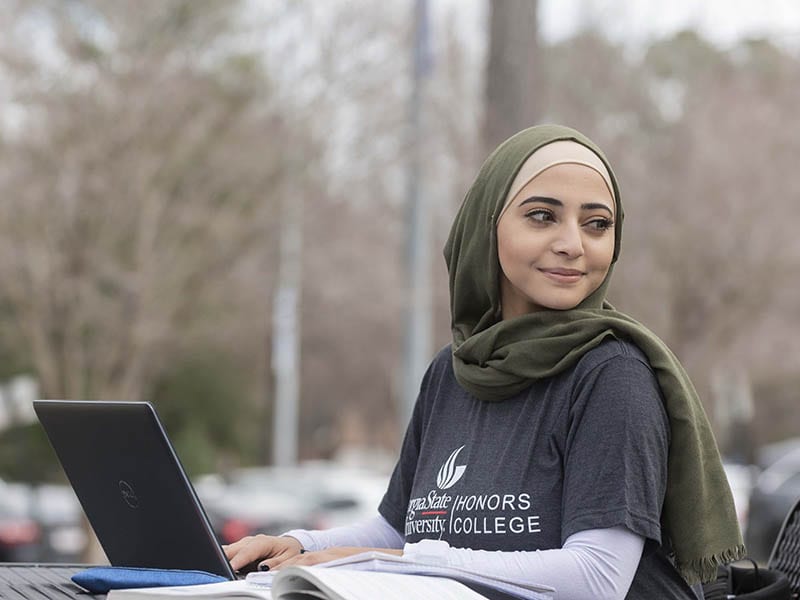 ALPHARETTA, Ga.—Afnan Abu Sarar was just 16 years old when she journeyed alone from her home in Amman, Jordan, to the United States to live with family friends.

Less than three weeks after her 2017 arrival in Houston, Hurricane Harvey hit Texas, and the Category 4 storm flooded her friends’ apartment, forcing the group to quickly evacuate.

“We had to swim to reach the boats that were evacuating us,” she said. “All our belongings were left behind.”

The group left Texas to move to Georgia, she said. For a while she was unable to reach her parents in Jordan to tell them she was safe.

“The scary part for me was having to make that decision of leaving Texas to go to Georgia,” she said. “It was scary but also exciting because I realized that I could open a new chapter in Georgia.”

Abu Sarar has written her new chapter with distinction. Now an Honors student at Georgia State University’s Perimeter College, her academic accomplishments and tenacity to overcome tough circumstances have been recognized. She recently was named a semifinalist for the national 2021 Jack Kent Cooke (JKC) Undergraduate Transfer Scholarship.

Finalists chosen to receive the scholarship are awarded up to $40,000 per year for three years to complete their bachelor’s degrees. This year’s recipients are expected to be announced in late April. Since 2002, 21 Perimeter students have received the scholarship.

Abu Sarar navigated many firsts following her move from Jordan, but it was not her first time in the United States. She was born in this country.

“My parents came to the United States in 2002 but moved back to Jordan to help my grandparents — my grandfather’s health was bad at the time,” said Abu Sarar, who was 6 months old when the family returned to Jordan. “I came back to America to be able to get an education and eventually help financially support my family.”

Abu Sarar has thrived in her new environment. She lives with an uncle in the Atlanta area and graduated from Johns Creek High School. On a friend’s recommendation, she enrolled in Perimeter College, taking courses in organic chemistry, physics and Honors English and maintaining a 4.0 grade point average.

Outside the classroom, she became a vice president in the STEM Career Club on the Alpharetta Campus and a tutor for students in calculus, chemistry and biology. She also was elected to the Student Government Association.

“Before COVID, Afnan was a face-to-face tutor in math and science in the Learning and Tutoring Center (LTC) at Alpharetta,” said Lizann Gibson, supervisor of Alpharetta’s LTC. “After we went online, she became a tutor online. Afnan is an outstanding young woman. I find her very reliable, organized and a leader.”

Abu Sarar, who is following the biology pathway at Perimeter, said her long-held interest in the human body and helping others led her to want to go into medicine.

“I remember when I was about 5 or 6 years old, and I had a plastic doctor’s kit,” she said. “I was fixated on becoming a doctor. After shadowing a physician in high school, I realized that I liked the leadership role and the responsibility of taking care of other people.”

Abu Sarar hopes to attend Emory University to pursue her dream of becoming a doctor.

“The Jack Kent Cooke Scholarship would mean a lot to me, financially and emotionally,” she said. “As a first-generation college student, I also know the Jack Kent Cooke Foundation would provide me with guidance as well as a community of Jack Kent Cooke scholars to rely on if I need help on any issues.”

She’s learned the importance of a supportive community.

That future already has begun. In the fall, her younger brother joined her and started college at Perimeter.