College of Law student Jeannine Holmes (J.D. ’22) has made history as the first Black editor-in-chief of the Law Review.

Holmes says she was unaware of the accomplishment initially, but the significance is not lost on her.

“It means a lot to me,” Holmes says. “I think representation really matters. For me, it’s always been important to see Black people, especially Black women, in legal spaces. It gives Black women the motivation to keep striving for their goals, and it just makes it more comfortable when you know you’re going to see yourself in places.”

As a second-year law student, Holmes was co-chair of the Law Review diversity committee. She also wrote an analysis of how a “freedom of association” argument would fare against the U.S. Supreme Court’s ruling in Bostock v. Clayton County, which expanded the definition of “sex” under Title VII to include sexual orientation.

Holmes says it has always been her goal to become a lawyer, and as an Army brat who moved all around the country during her childhood, she has taken a similarly winding path to get here.

She graduated from the University of Virginia with a degree in English in 2008. She then studied fashion for a year at New York’s Parsons School of Design. While in New York, Holmes started a fashion company with a classmate and some of their garments appeared on VH1’s “Love & Hip Hop.” However, it wasn’t enough to pay the bills. 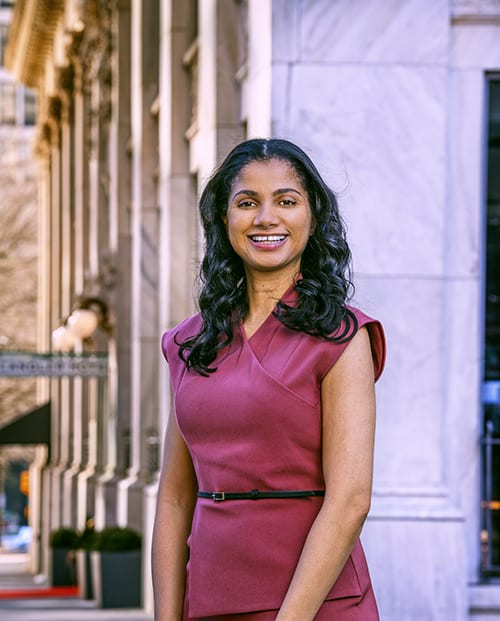 Holmes worked in human resources conducting investigations by day, which is where her desire to become a lawyer returned.

“A boss told me I was passionate about investigations, so I should become a lawyer,” Holmes says. “I told her I always wanted to be a lawyer, and it went from there.”

In 2016, Holmes relocated to Atlanta to work at Emory Healthcare where her interest in law deepened. She discovered the College of Law’s nationally recognized part-time program, which gave her the opportunity to enroll in law school while keeping her job as senior manager of Emory’s Sports Medicine Program.

Even though school and work keep Holmes busy, she has found time to participate in other co-curricular activities such as the Black Law Students Association. She’s taking advocacy classes with the goal of becoming a litigator after graduation.

“Working full time and trying to go to school makes you squeeze out every little minute,” Holmes says. “Any time I have an hour between meetings or a break between work and class, I’m finding something I can do during that time. It’s all about time management.”

Soon Holmes will be able to focus more exclusively on her legal pursuits, including the Law Review. Holmes says over the last year she saw the progress the organization was making toward inclusion under editor-in-chief Nick Daly and executive editor Alex McDonald, and she wanted to assume a position that would allow her to further that progress.

“I just want to keep it going,” Holmes says. “I saw all the progress they made with diversity and inclusion, and I want to keep building on that. I also want to find ways to make the editing process more efficient and deal with all the changes because of COVID-19.”