Ben Chapman is Preparing the Lawyers of 2040

Ben Chapman has been tinkering with things his entire life. As a kid in Fayetteville, Ark., he and his brother dove in dumpsters looking for broken electronics to revive. His parents always encouraged curiosity and creativity. He didn’t know it at the time, but this was forecasting a career working with computers in order to make information accessible to everyone.

Chapman’s route to combining his loves of law, languages and technology has been all but direct. He attended Indiana University where he intended to major in computer science and Spanish, but after honors computer science proved harder than he thought, he changed his major to political science. He leaned on the love of languages that he developed as a child, studying Spanish, Latin, German and Russian—his personal predecessors to coding in Basic, Pascal and Python.

He spent a year as a student in Peru before going on to the University of Texas, Austin to start a program in Latin American Studies. However, he enjoyed Austin more than grad school, so he became a programmer for the State Law Library. Then, he spent time in Spain as an English teacher before deciding to return to Arkansas for law school. It was around this time that Apple co-founder, Steve Jobs, was making waves with the NeXT computer. In fact, in 1991, after graduating from law school, Chapman took his $5,000 law firm signing bonus and purchased one.

“I was totally optimistic and a believer that if we got everyone online, we would all be able to learn from one another,” Chapman said.

Almost six years into practicing corporate law, Chapman realized that legal technology and being in an academic environment excited him more than closing deals. He’d worked for Lexis Nexis in law school and mining data had always been his happy place. 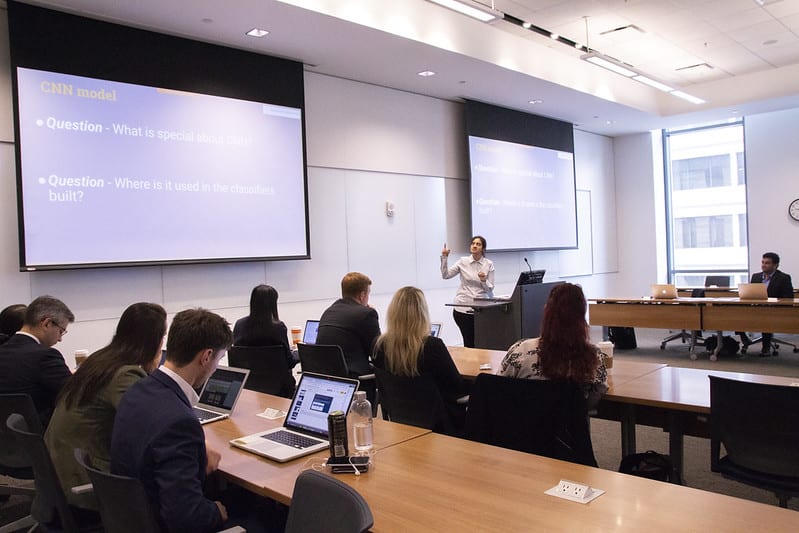 He moved to Atlanta in 2003 to work at Emory University, where he spent 15 years as the assistant dean for information technology at Emory University School of Law. He says that one of his proudest achievements from that time was hosting Tulane University Law’s servers after Hurricane Katrina.

In 2018, he came to Georgia State Law for the chance to establish the new Legal Analytics & Innovation Initiative.

In the program, students learn the latest technologies that law firms and corporations are using to make billing, legal research and analytics more efficient. In addition, they learn how to use technology to advance justice. For example, last fall, students in the Legal Analytics Lab used algorithms to analyze capital punishment cases in the state of Florida in order to find common factors in charging decisions. They have also looked at everything from employment lawsuits to whether clients are getting everything they’re promised in mutual fund agreements. For Chapman, it’s all about equal access to data.

“I am a true believer in the benefits of networked flows of information,” Chapman said. “I loved being able to connect my legal training with the desire to share information. I also like making people more efficient. Do you work for the computer, or does the computer work for you?”

Looking forward, Chapman’s goal is to educate students so that they anticipate the needs of an ever-changing, complex legal system. Email, file sharing systems and video calls raise legal questions about privacy. Access to legal services is cost prohibitive for most people. Large firms are using computer systems to measure associates’ productivity. In the future, Chapman would like to see a mandatory legal analytics course for every law student.

“I want us to be a recognized center of excellence in legal analytics and innovation,” Chapman said. “Algorithms are determining the news we read, who our friends are, and the products we buy. In response to these accelerating changes in the world, we hope to train future-ready lawyers who will be practicing for the next 40 to 50 years.”