Leaving the small mountain town of Ellijay, Ga., for one of the South’s busiest cities, Grace Davenport (B.A. ’21) discovered at Georgia State something she never expected: a tight-knit community that felt like home.

With an interest in film and media, Grace Davenport (B.A. ’21) had already set her sights on Atlanta, the proclaimed “Hollywood of the South,” as the perfect college setting. But it wasn’t until she attended a conference downtown that she took notice of Georgia State. 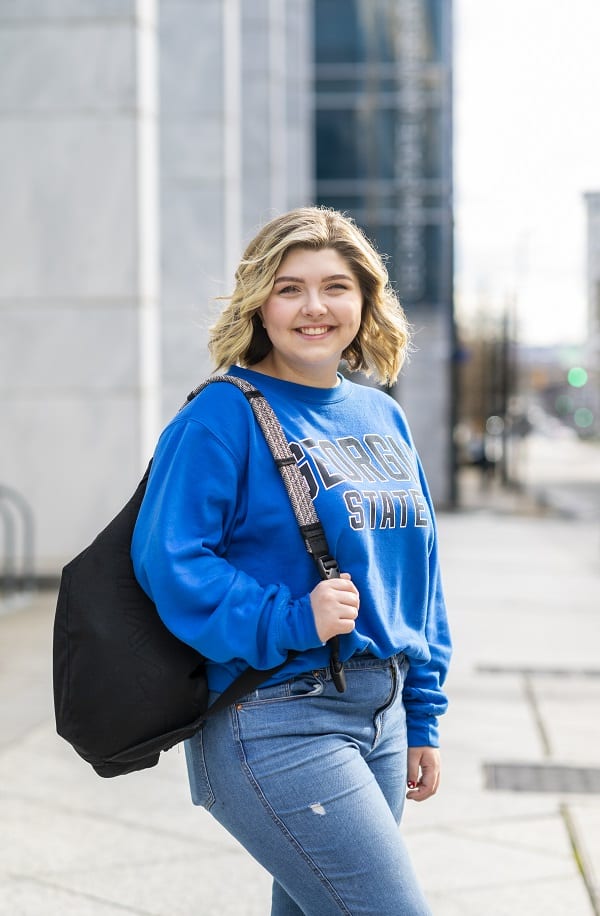 She toured the Atlanta Campus as soon as she could and fell in love with the urban setting, the diverse student body and what she describes as a noticeable focus on student success.

“I really appreciate how accepting Georgia State is,” Davenport said. “It’s an environment that welcomes students from so many different backgrounds, all of whom are being given the resources they need.”

It took her little time to find her footing on campus. She poured herself into her hobbies and interests, joining the university’s Film Club, the GSU Players theatrical society, Baptist Collegiate Ministries and the 1913 Society, where she easily made friends and became part of an intimate circle.

With Fortune 500 headquarters, award-winning restaurants and world-famous attractions at every turn, Davenport and her friends quickly recognized the options and possibilities that surrounded them in Atlanta. They made it a point to spend their undergraduate years getting to the know the city beyond campus.

“At Georgia State, you have what Atlanta provides, plus all that campus does,” she said. “Being young and exploring the city with your friends is wonderful. I’ve really loved growing with Atlanta and watching it grow.”

Davenport admits she could talk all day about the opportunity and direction she’s found at Georgia State, and so she does. She’s been a Welcome Center tour guide for three years, never tiring of her experiences with visiting prospective students.

Set to graduate in May with a degree in Film and Media, Davenport attributes her academic achievements and personal growth to the strong community of peers she found from the beginning. And as she looks toward a career in film, theater or TV casting, she’s realized that network is one that keeps on giving.

Friends from her classes and the student organizations she’s been a part of for four years are doing everything they can to help her: emailing her about internship openings, introducing her to people in the film and media fields, and passing her name on to other professors.

“We help each other because we’re all a part of this ‘Panther family,’” she said. “It’s incredible.”