For Harold Franklin, mentorship is the key to success in law

Every summer, dozens of bright-eyed teens from the metro Atlanta area come to Georgia State Law for the Justice Robert Benham Law Camp. It’s one of Harold Franklin’s (J.D. ’99) favorite times of year. During his tenure as president of the Gate City Bar Association, Harold established the camp—named for his friend and mentor, retired Georgia Supreme Court Justice, Robert Benham, who was the first African American appointed to the Supreme Court of Georgia in 1989.

This summer, COVID-19 almost thwarted their plans for the first time in 14 years, but they charged ahead and held the camp online to serve more students than ever before.

A number of students who have attended the camp have graduated from the College of Law. It’s Franklin’s way of giving back in the way that so many people gave to him.

“As a beginning lawyer, it is so important to have individuals who are invested in you and allow you to be vulnerable enough to ask dumb questions,” said Franklin. “I try to be the mentor that I would have wanted.”

Franklin spent his early years in Southwest Atlanta before the family moved to Smyrna, Ga. His father was a math professor and his mother an educator turned accomplished entrepreneur. He earned his undergraduate degree in economics with a minor in Spanish from Emory University and worked as an insurance broker for six years after graduating before enrolling at Georgia State Law. Another mentor, professor Anne Emmanuel, had done some volunteer work with his mother, and she encouraged him to apply to the College of Law. 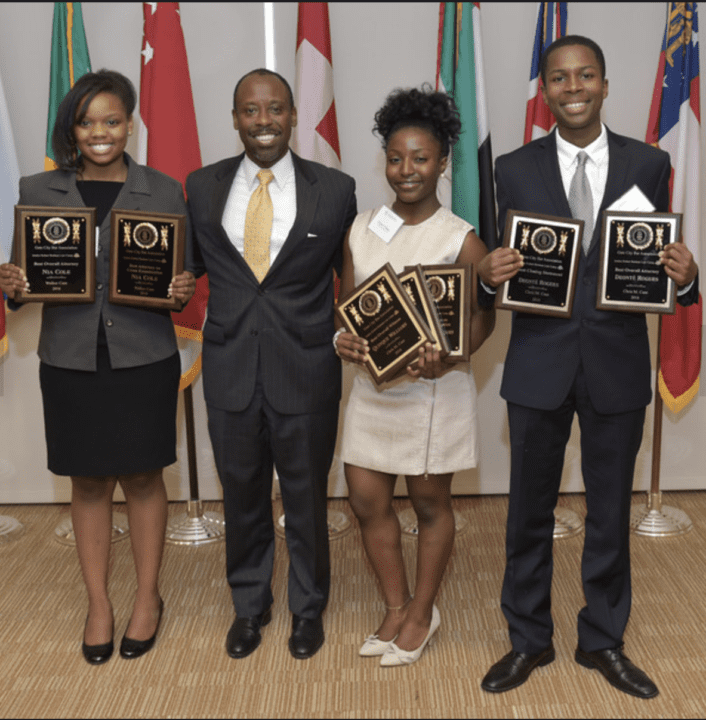 Franklin in 2016 with students at the 10th annual Justice Benham Law Camp.

He knew he wanted to be a litigator, and immediately got involved in mock trial and appellate competitions. He recalls fondly traveling to national competitions and learning from professors Ellen Podgor and Roy Sobelson. After graduating from the College of Law, he worked at an insurance defense firm for a year before going to King & Spalding, where he has been for the last 20 years.

As a partner in the firm’s product liability practice, Franklin focuses on high-profile product liability litigation as well as business disputes and internal investigations. He is also the diversity chair at King & Spalding, where he advises the firm on creating an inclusive environment and leads numerous initiatives, including a new mentoring program.

“Our profession has lagged behind many others and we’re working to attract and retain diverse talent,” said Franklin. “Clients get why diversity is important and they expect it.”

In addition to mentorship and diversity & inclusion work, Franklin’s pro bono work has focused on voting rights for the last 20 years. He is the chair of Georgia Election Protection through the Lawyers’ Committee for Civil Rights Under Law, a non-partisan organization that works to prevent disenfranchisement and voter suppression. He worked with the late Congressman John Lewis on voting rights protection as well.

“As a society, we should all agree that there is nothing partisan about ensuring that everyone who is eligible and registered to vote should be able to vote and that their vote will be counted,” said Franklin.

It is this sense of duty that he instills in his mentees and that he says Georgia State Law drilled into him. His younger brother is also a Georgia State Law alumnus, and his 21-year-old son is studying for the LSAT with plans to follow in his father’s footsteps.

“The legal profession is a noble profession that has allowed me to have a broad impact in ways that I did not fully realize were possible prior to becoming a lawyer,” said Franklin.