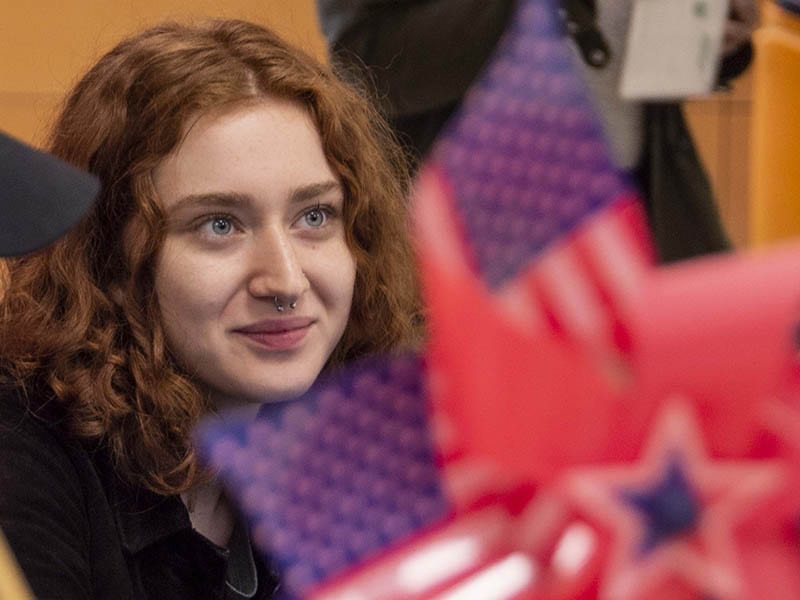 DECATUR, Ga.—November’s national, state and local elections appear to be attracting the interest of a larger than usual number of young voters, including Niles Francis.

A freshman at Georgia State University’s Perimeter College and first-time voter, Francis is attracting attention himself — as an 18-year-old political strategist. Over the past several months, he has made national TV appearances on MSNBC and CSPAN and been featured through other media channels, such as Fox5Atlanta and Jewish Insider.

Francis has nearly 20,000 Twitter followers, gets frequent interview requests and is a regular contributor to Decision Desk HQ, a website that collects, organizes and reports election results and provides election-related data to media outlets and political organizations. Despite this, the teenager regards his passion for politics as only a hobby.

“It allows me to learn about different areas, different states,” Francis said of his interest in tracking and speculating on key political races in Georgia and elsewhere. “It’s just something I enjoy doing.”

“Niles is a rising star on the political stage,” said Garrett, who’s also an associate chair of the History, Political Science & African-American Studies Department at Perimeter.

“He is an exemplary role model for young people who are reluctant to engage in the political process,” Garrett said.

According to results from a Harvard Youth Poll, youth engagement in voting has increased. The poll, conducted in August and September, shows an uptick in the number of intended presidential election voters between the ages of 18 and 29, with 63 percent saying they’d “definitely be voting,” compared to 47 percent who said the same in 2016.

Barbara Robertson, a senior lecturer at Perimeter, conducted a non-scientific poll of her political science students. She asked 100 students and found that most plan to vote. She polled another 50 to gauge whether they watched September’s first presidential debate. The majority said “yes.”

“I would say school shootings pushed youth turnout in 2018,” Robertson said. “This has been compounded with the police shootings, Black Lives Matter activism, and the economic woes of this group, who are much more likely to have to live at home after graduating high school and face high debt when choosing college.”

Destiny Crocker is 19 and one of Robertson’s students. She cast her ballot on Oct. 12, the first day of early voting for Georgia. Immigration, police-involved shootings and deaths and the pandemic are among key issues that influenced her vote.

“I’m very interested in the election, and all of my friends are voting,” Crocker said.

Assistant professor of history Dr. Dennise Turner says she has noted that more of her students seem to be engaged and interested in the 2020 election compared to the mid-terms two years ago and the 2016 presidential race.

“Many did not vote in 2016 and regret that decision,” she said. “And there are some who are able to vote for the first time and are really excited. We are watching the debates, paying attention to the news and discussing election issues and challenges.”

Turner also is the faculty adviser for the History and Politics Club on the Dunwoody Campus. While the club’s activities are now limited because of social distance requirements, Turner said students can find voter education resources and learn of voter-related student events on Georgia State’s non-partisan My Vote Everywhere platform.

“What is different from most presidential years is the interest in offices beyond the one at the top of the ballot,” Stone said. “Not only do I expect students to register to vote and turn out in large numbers this fall, but to make informed choices about races beyond the presidential contest.”