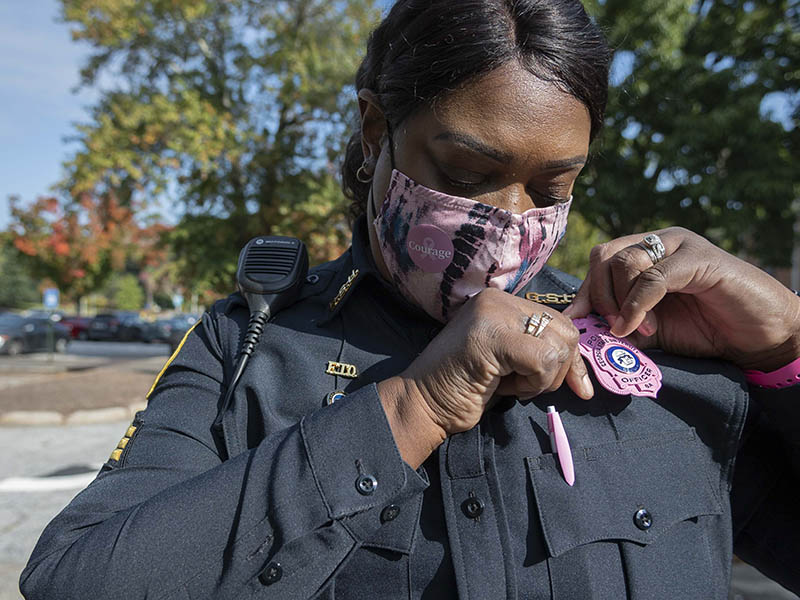 CLARKSTON, Ga.–Cheryl Lowman made a few promises to herself and God when she was going through aggressive chemotherapy for Stage 3 breast cancer.

One was to become an advocate for early detection and mammography. Another was to apply to be a sergeant in the Georgia State University Police Department, where she works. And the third was to go to college.

Now in remission from cancer for seven years, Lowman is fulfilling those promises. She’s a sergeant in Georgia State’s police department, an advocate for breast cancer education and a student, pursuing an associate degree at Perimeter College on Georgia State’s Clarkston Campus. 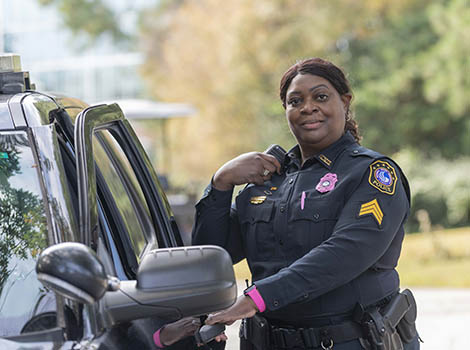 Recently, thanks to Lowman’s passion, more than 100 officers of Georgia State’s police force temporarily traded their blue badges for pink in honor of October being Breast Cancer Awareness Month. She hopes it will be an annual observance.

“I try to educate women on the signs and symptoms of cancer because I ignored my own and skipped my (mammogram) exam in 2011,” she said.

Lowman was diagnosed with Stage 3 breast cancer in 2012 while working as a criminal investigation detective on Georgia State’s Atlanta Campus. She received a mastectomy in 2013, along with an aggressive chemotherapy regimen.

Her family and work friends became her lifeline during treatment.

“I became so sick from all the chemo, there were days I felt like I was 100 years old,” she said. “I didn’t believe I would make it through. I received so much love and support from my family, friends and coworkers. Their encouragement gave me the strength to keep going.”

Lowman has adjusted some of her goals. When she completes her undergraduate education, she hopes to work in social services to help older people.

She and her husband are caretakers of her parents, and Lowman’s mother recently was diagnosed with an early stage of breast cancer. Mother and daughter now take the same long-term cancer treatment medication.

The police sergeant not only shares breast health and cancer information on campus. At her church in Forest Park, she hosts breast cancer awareness luncheons at which she features guest speakers, distributes gifts and information, and celebrates cancer survivors.

“It’s been a long journey to survival, but I have learned so much,” she said. “I’ve met wonderful people because I have shared my story in hopes it will help someone else.”