A New Chapter on Mount Wilson

More than 5,000 feet above sea level in Mt. Wilson, Calif., sits one of Georgia State’s most renowned facilities — the Center for High Angular Resolution Astronomy (CHARA) Array. The world’s largest optical interferometer, the array is made up of six widely separated telescopes that act together to simulate a single, 330-meter diameter instrument, much larger than any existing telescope.

Using CHARA, researchers can observe stars in incredibly fine detail. The instrument has been used to produce the first images of a nova as it exploded, the sharpest images of young planet-forming stars, and recently, the first direct evidence that groups of stars can tear apart their planet-forming disk, leaving it warped and with tilted rings.

Just after learning this fall that the array would receive $7.1 million from the National Science Foundation (NSF) to expand the facility and its open-access program for scientists, the CHARA staff faced the terrifying possibility that Mt. Wilson could be consumed by the Bobcat Fire, which has burned more than 100,000 acres in the San Gabriel Mountains.

“We’ve dealt with wildfires in the past, but this is the closest that a fire has ever gotten to the observatory,” said Doug Gies, Regents’ Professor of Physics and Astronomy and director of the center. “We’ve been holding our breath.”

We spoke with Gies and Theo ten Brummelaar, director of the array, about the harrowing ordeal and the future of CHARA.

This is not the first time that wildfires have threatened Mt. Wilson, but as you note, it’s the first time a fire has gotten this close — within 500 feet of the observatory. What’s it been like these past few weeks?

Gies: It’s a really anxious time. The forest service and all the agencies involved in putting out the fire have been extraordinarily dedicated to keeping the observatory intact. Larry Webster, our site manager, and Craig Woods, assistant site manager, have been working with the fire chiefs around the clock.

Every few days, when a new team would come up to the top of the mountain, Larry would explain the history of the Mt. Wilson Observatory and the array and talk about how scientists can do work there that can’t be done anywhere else. He’d take them over to the telescope and walk up the staircase to the dome so they could see it for themselves how priceless it is. Gail Schafer, associate director of the array, has also been keeping a daily journal of the fire’s progress. 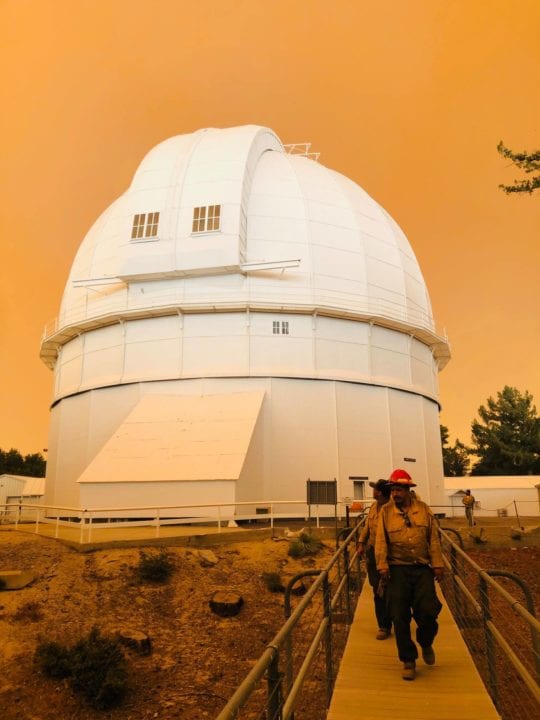 Firefighters on the ground working to defend the observatory. Courtesy of the Mount Wilson Institute.

ten Brummelaar: The threat of fire will never go away, and it will only get larger, what with global warming and a lack of resources for forest management. We had the Station Fire just over 10 years ago. It didn’t come as close to the array, but it was just as scary.

Gies: The last big fire that came from the east like the Bobcat Fire was in 1953. This whole area had not burned since 1953, and there was a lot of material that had accumulated over that time. The good news is that we survived, and hopefully, we’re going to be all right for another 60 years.

What’s your biggest concern now that the Bobcat Fire is mostly under control?

ten Brummelaar: A big issue now is ash and dust raining down on our telescopes. Ash combined with little bit of water can dissolve the coatings on the optics. You also don’t want ash or dust getting mixed up inside the rather delicate mechanisms. Fortunately, all the telescopes that have been inspected so far have escaped serious damage because we have mirror covers over everything.

Looking forward, the NSF recently committed to continue support for CHARA’s open-access program for scientists. How does the program work?

ten Brummelaar: For years, we have worked with scientists and engineers who build instruments that are integrated into the CHARA Array. The initial open-access grant, which we received from the National Science Foundation in 2016, has allowed us to invite astronomers who don’t build instruments to use the array to conduct their own unique science.

Because it is such an important resource for the global research community, demand for time on the CHARA Array has been very high. The new NSF grant will allow us to expand the program from 60 nights of observing time per year to 100 nights per year. So far, almost 300 astronomers from across the U.S. and around the world have applied for time on the array through the open-access program.

What type of unique research can astronomers conduct at the array they can’t conduct elsewhere?

Gies: The common theme is the ability to look at very, very minute objects in the sky. Within that theme, it’s an enormous scope of inquiry: Young stars as they’re still forming planets, stars with planets orbiting around them, how stars lose their mass at the end of their lives and faraway galaxies. Recently, we had a scientist observing an active galactic nucleus, a compact area at the center of a galaxy that is brighter than normal. In this case, the galaxy has a supermassive black hole at its core. We think of black holes as literally “black,” but they can actually be extraordinarily bright because of all the material that’s being drawn towards them. One of our students was able to get one of the first observations of these galaxies.

ten Brummelaar: For people who need extremely high-resolution images, there are only two places in the world to go. One is the Very Large Telescope Interferometer in Chile, and the other is the CHARA Array. Of the two, our instrument is the most powerful in terms of resolution and wavelength (color range).

This year, the NSF is celebrating the 30th anniversary of its Advanced Technologies and Instrumentation (ATI) funding program. How has the ATI program benefitted CHARA?

ten Brummelaar: The ATI program has been of seminal importance because it has funded a great deal of our instrument programs and funded other universities to build instruments for us. The CHARA Array was designed and built by a team led by Hal McAlister, a professor who was the founder of CHARA and the array’s first director, and ATI funded the original design study in 1992 as well as many of the major instrument programs. It has also funded other universities who want to build instruments for us.

Recently, ATI has supported the development of a new instrument called the Michigan Young Star Imager at CHARA, which our collaborators at the University of Michigan are building. This is a new infrared instrument that can combine light from all six telescopes better than we have before to study planet formation. The program has also supported the purchase of a new infrared camera for one of our oldest beam combiners called CLASSIC.

CHARA recently received a second grant from the NSF to add a seventh, mobile telescope. What will that mean for you and other researchers who are studying the stars using the array?

Gies: Adding a mobile telescope will provide a lot of flexibility. Our telescopes are currently separated by 330 meters, but that’s still not far enough apart to see, for example, the surfaces of stars in fine detail. We need to spread out even further. On the other end of things, it’s a challenge for us to get good images of some stars because they’re too large. With the mobile telescope, we can push the limits on both ends. We’ll be able to move the telescope even farther away to see tinier things, and bring it closer to see larger objects in the sky. It will really expand the power of the array in terms of its ability to make pictures on many different size scales.

We hope eventually that we might be able to see the silhouette of a planet going in front of a star as it makes its passage. With this new instrument, we could potentially see that happen.

What’s next on the horizon for the CHARA Array? How does this new telescope fit in with your long-term plans?

ten Brummelaar: We’d like to eventually have more telescopes farther away and more telescopes closer together. We hope that one day we might have at least 12 telescopes, which could provide incredible images of stars.

The only way we can have telescopes separated by such large distances is by sending light through fiber-optic cables. Right now, we use eight-inch diameter aluminum tubes held together with rubber sleeves. We pump out as much air as possible and then send the light through these pipes. This technology has been used for more than 100 years. It works, but it’s very expensive and the greater the distance, the less practical it is to use.

The mobile telescope is a good project to start with because it allows us to experiment with the optical fiber technology, which has never before been used in this way.