ATLANTA—Georgia State University President Mark Becker, who has led the university through the most dynamic period of growth and development in its history, has announced his plans to leave the presidency at the end of June 2021.

Becker, Georgia State’s president for the past 12 years, plans to take an educational leave following his presidency to conduct research and write. The University System of Georgia will conduct a national search for Becker’s successor, and will likely make an appointment to start in July.

Under Becker’s leadership, Georgia State has become widely recognized as the national leader in the introduction of highly successful, innovative programs and initiatives to foster student success. During his tenure, the university has set records for enrollment, graduation rates and total graduates. Becker has placed a high priority on ensuring financial support for students. Need- and merit-based scholarship funds distributed by the university have tripled since his arrival. The university has also set fundraising records.

“President Mark Becker’s outstanding leadership has helped Georgia State University set the national standard for innovation in student success, resulting in dramatic increases in graduation rates for students of all backgrounds,” said Steve Wrigley, chancellor of the University System of Georgia. “Georgia State has gained in quality and stature during Mark’s tenure, from record-setting research productivity to strong financial management.

“His vision transformed the university’s physical campus and lifted intercollegiate athletics to new heights. He guided a complex institutional consolidation to a successful outcome and has been a leader off-campus in the city and region. All the while, he provided excellent counsel to me and has become a valued friend. While we will organize a national search soon to find the university’s next president, I’m grateful for his service to our students and the University System of Georgia. Georgia State has transformed thousands of lives because of Mark’s leadership, and we will miss him greatly.” 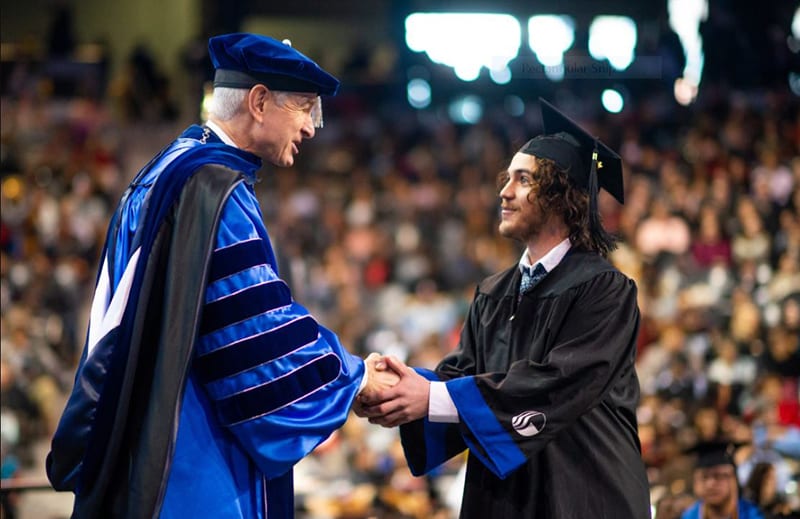 President Mark Becker shakes hands with a new graduate during the winter 2018 commencement.

Reflecting his vision of the modern public research university, Georgia State adopted a dynamic 10-year strategic plan that has fueled its emergence as one of the nation’s premier urban research universities. Becker was named one of America’s 10 most innovative university presidents by Washington Monthly in 2015, and the university has been ranked as one of the most innovative universities in the country by U.S. News & World Report magazine ever since the innovation ranking was introduced. He was awarded the Theodore M. Hesburgh Award for Leadership Excellence two years ago and was given the Academic Leadership Award by the Carnegie Corporation in 2017 for Georgia State’s achievements in “eliminating disparities in graduation rates based on race, ethnicity and first-generation status.”

As a first-generation college student who began his educational career at a community college, Becker has been personally and professionally committed to ensuring students of all economic backgrounds succeed. In a 10-year period, the university’s graduation rates increased by 22 percentage points. The university leads the nation in eliminating disparities in graduation rates based on race, ethnicity or income, and as one of the most diverse universities in America, Georgia State is first in the nation among nonprofit institutions in graduating African American students.

Becker has led Georgia State’s rapid emergence as one of the nation’s leading research institutions. Research expenditures have increased more than 153 percent over the last decade, making Georgia State one of the fastest-growing research universities in the country.

Georgia State’s consolidation with Georgia Perimeter College (GPC) in 2016 brought the university’s student enrollment to more than 50,000, making it the largest university in Georgia and one of the largest in the nation. In mandating the consolidation, the University System of Georgia Board of Regents said it anticipated Georgia State’s highly successful student success initiatives would have a major impact on the performance of students at GPC, a two-year college, and that has proven to be true. In just a few years, Georgia State has dramatically increased graduation rates and eliminated all disparities in graduation based on race, ethnicity or income for Perimeter College students.

Becker has aggressively advanced the physical development of the university’s Atlanta Campus, and Georgia State is widely acknowledged as a major catalyst in the revitalization of downtown Atlanta. The university has made major additions to campus housing and dining, research and academic facilities, and intramural and athletics facilities. The university added football to its athletics program in 2010, and in 2013 introduced beach volleyball and moved to the Sun Belt Conference to advance into the Division I – Football Bowl Subdivision level of NCAA competition. After Major League Baseball’s Atlanta Braves’ decision to vacate Turner Field in downtown Atlanta, he led the university’s acquisition and renovation of the stadium that became the home for Georgia State football in 2017.

A statistician, Becker has had a distinguished career in biostatistics and public health sciences. For most of his professorial career he was a member of the faculty in the Department of Biostatistics at the University of Michigan, where he also held appointments in the Institute for Social Research and the Department of Statistics. He is a Fellow of the American Statistical Association and the American Association for the Advancement of Science. Becker has been principal investigator on research grants from the National Institutes of Health and the National Science Foundation.