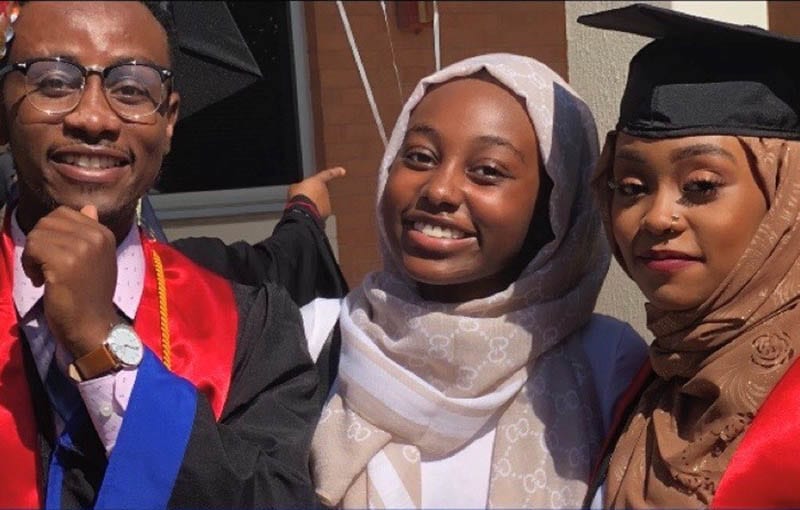 DECATUR, Ga. —What does a scholarship mean when you’re from a family with 12 children?

For their parents, who already have ushered nine children through school, it has provided peace of mind.

Samiro Hussein knew she wanted to go to college. But, with seven sisters and four brothers, including an older sister who graduated from Perimeter in 2018, the Clarkston resident knew that realizing her ambition would be linked to getting a scholarship.

“I had the HOPE scholarship and Pell grant to pay for my classes, but I would have to work in college to pay my bills,” she said.

With a 3.9 GPA at Clarkston High School, she was accepted to several private colleges in metro Atlanta but none provided the tuition assistance she needed without substantial loans or working part time. As a State Farm Scholar, she received tuition assistance and more.

“Being a State Farm Scholar made it easier to adjust to college — giving me access to tutoring, a peer mentor, volunteering opportunities and even a quite comfy place to do my assignments,” she said. “It also meant focusing more on school. I was able to worry less about work and focus more on my grades, giving back and also networking.”

After graduating with her associate degree in 2019 as part of the State Farm Scholars inaugural class, she is now studying biomedical science and enterprise on Georgia State’s Atlanta Campus, with a goal of graduating with a bachelor’s degree in May 2021.

Her older brother, Abdirahman, nicknamed “Abdi,” also received a State Farm Scholarship and graduated with his sister in 2019 with his associate degree.

“The support and State Farm name behind the scholarship have held weight in the social, academic and job fields,” he said. “The experiences I received as a State Farm Scholar I may not have been able to have as a regular Perimeter College student. I appreciated the opportunities, such as scholarships, skill-building events, networking and volunteering. Also, I would not have gotten the chance to make so many friends since I am an introvert.”

Abdi also is pursuing a bachelor degree in biomedical science and enterprise on Georgia State’s Atlanta Campus and hopes to graduate in May 2021.

The family’s youngest child, Adar — whom Abdi calls “the end of the line” — is taking classes this summer as part of Perimeter Academy, a student success program at Perimeter. She also was awarded a State Farm Scholarship. With peer mentoring and academic support, Perimeter Academy helps prepare traditional students for the rigors of college.

“Our parents have always wanted us to go to college closer to home,” she said. “Georgia State was one of my first choices for college.”
Following in her siblings’ footsteps means a lot to Adar.

“It is also an honor to continue that legacy that has been established — the legacy of success and striving to be the best,” she said. “With the opportunity of the State Farm Scholarship, I am able to leave my own mark on this legacy.”

While Adar is officially “the end of the line” for her immediate family, she notes she has nine nieces and nephews.

“There’s sure to be another Hussein somewhere,” she said.

Reid’s sister, Zoiee, graduated from Perimeter in May 2020. Vasquez Reyes’ brother, Kevin, is a current State Farm Scholar and sophomore at Perimeter College.

“The GSU LIFT, State Farm Scholarship program has gone from six awardees to 190 students in less than four years,” said Des Potier, director of Georgia State’s  Learning, Income, Family, Transformation (LIFT) program and State Farm Scholars. “When I see these siblings, all I can say is that they embody the family part of GSU LIFT. Their hard work, grit and perseverance are what makes the program special.”

Mark Robinson, a State Farm corporate responsibility analyst, has been involved with the scholarship program over the past three years.

“State Farm has a rich history of supporting education initiatives across the country,” Robinson said. “Our unique public-private partnership with Georgia State University has been extremely successful at improving outcomes for students from underserved communities. It is awesome to see the State Farm Scholar program being treated as a ‘legacy’ within the Hussein household.”