Sudeep Lama, a master’s degree student in the Institute for Biomedical Sciences, spent his summer working with an international medical device company to market a new diagnostic tool that will soon be available to help epilepsy patients.

The first in his family to graduate from high school or college, Lama has always been passionate about human health, but he didn’t want a traditional role in healthcare, such as becoming a doctor or a nurse.

“I realized that I wanted to look at the issue from a more systematic level,” Lama said. 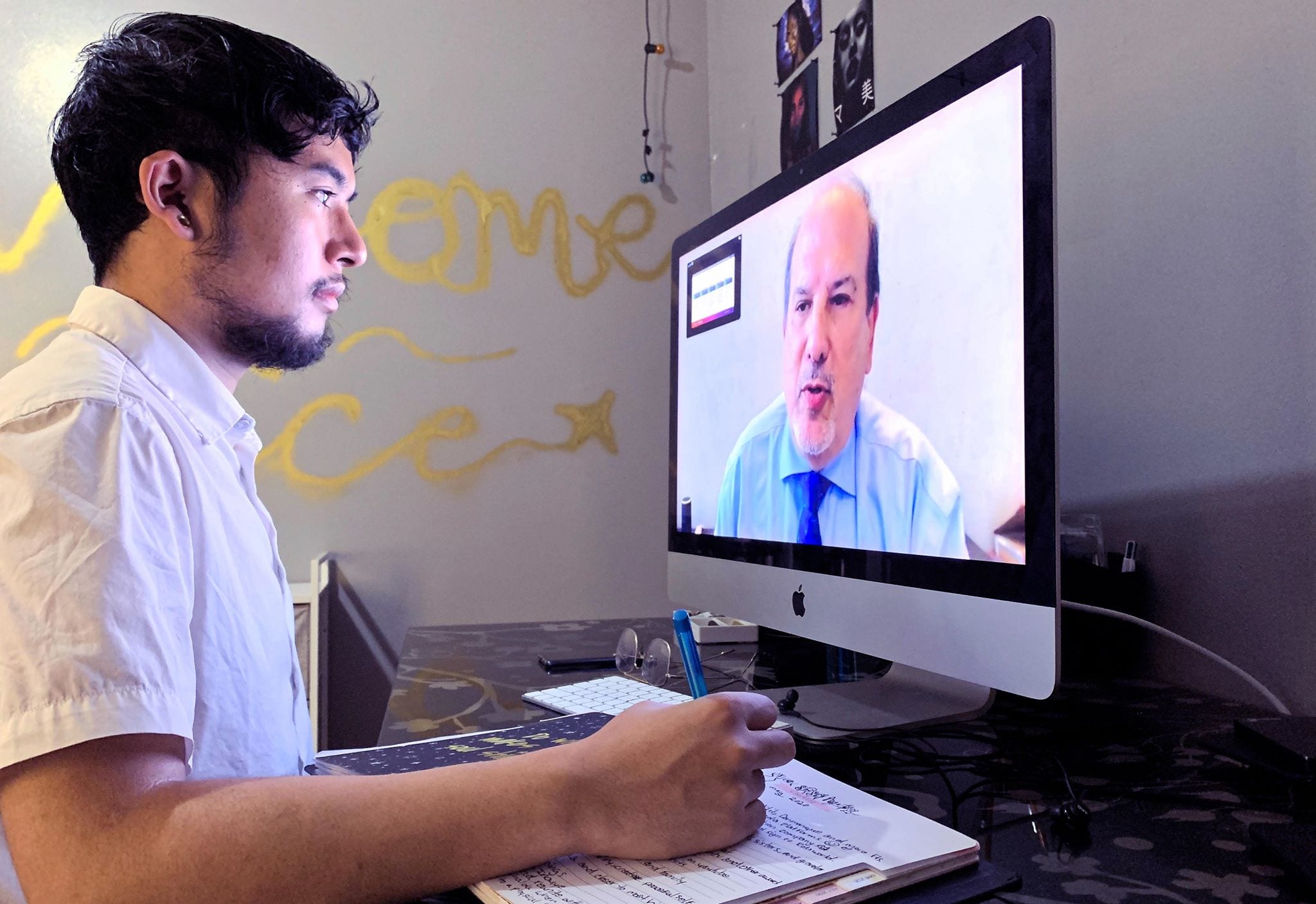 Sudeep Lama participates in a virtual meeting with Dr. Bruce Lavin, chief medical officer at BioSerenity and one of Lama’s mentors at the company.

After completing his bachelor’s degree in neuroscience at Earlham (Ind.) College, Lama enrolled in the Biomedical Enterprise master’s degree program in the Institute for Biomedical Sciences at Georgia State University.

“It was a really good fit for me,” Lama said. “I had a variety of interests, and the program offered students training not only in biomedicine, but entrepreneurship and law as well. I was able to take a lot of healthcare administrative classes, and I got a bird’s eye view of how the healthcare ecosystem is integrated.”

The program enabled Lama to participate in a virtual internship this summer with BioSerenity, an international medical device company based in Paris with offices in the Atlanta, Boston and Chicago areas. Dr. Bruce Lavin, an adjunct professor in the Institute for Biomedical Sciences and chief medical officer at BioSerenity, made the internship possible.

BioSerenity will soon release a medical grade tele-electroencephalogram diagnostic device to assist people with epilepsy, and Lama has spent the summer working as a contract consultant in the Health Informatics and Telehealth Division at BioSerenity, gathering competitive intelligence for the company’s epilepsy sector.

He’s figuring out the needs of epilepsy patients and the opportunities that are available, as well as comparing competitors’ products, so he can provide recommendations that give BioSerenity the competitive edge. He will be presenting his findings to BioSerenity’s senior management in August.

Lama’s research has involved scholarly research articles and information from annual epilepsy conferences and the websites of epilepsy foundations and competitors. He’s also been contacting epilepsy experts and speaking with people on blogs who are suffering from this illness. He’s had to quickly gain in-depth knowledge about epilepsy, the fourth most common neurological disorder.

The role has the possibility to turn into a part-time or full-time position upon graduation.

Three to five days a week, Lama and his colleague meet virtually via GoToMeeting with two BioSerenity mentors to give updates on their research and brainstorm about market opportunities and product improvements. The mentors give feedback on how to best move the project forward and offer career advice.

Lama has also had the opportunity to participate in international meetings with the company’s headquarters in Paris, which has participants from around the world. He will eventually present his work to the international team.

He’s also gained an understanding about the business side of biomedicine.

“Now, I have a general idea of how you implement an idea, take it from the lab and create a viable medical product around it that you can use to influence or improve the daily health of people,” Lama said.

When Lama graduates in December, he wants to land a job as a consultant in the biomedical industry so he can gain the broad knowledge and skills that are essential for one day starting his own biomedical venture.

“A lot of times, I feel that I am carving an unknown path that none of my family and friends have walked on before,” Lama said. “So, it does feel like a big accomplishment, not only because of where I am and where I am headed, but also because now I can help others that want to walk the same path as me.”