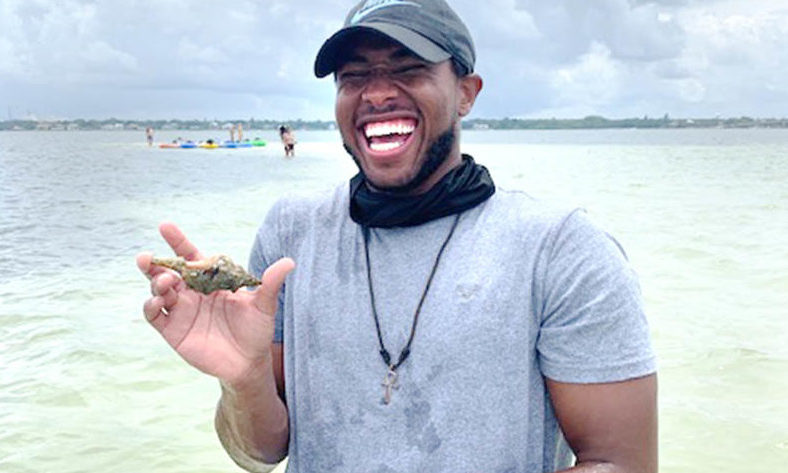 It has been a summer of firsts for Georgia State University Perimeter College student Devin Jordan: his first time on a boat, his first time to see dolphins and sharks in the wild and his first onsite research experience.

Jordan is one of 10 college students in the nation selected for a Research Experience for Undergraduates (REU) program in Sarasota, Fla.

A biology student, Jordan is tracking and photographing dolphins for the Chicago Zoological Society’s Sarasota Dolphin Research Program. The eight-week program, in collaboration with the Mote Marine Laboratory in Sarasota, studies dolphin behavior and health. It’s now in its 50th year of research and sixth generation of dolphins in the Sarasota Bay area. Jordan’s research experience is funded by the National Science Foundation through Mote. 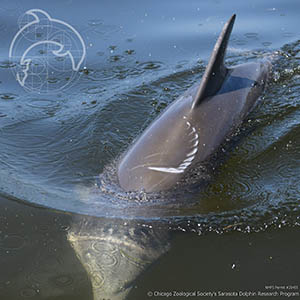 Jordan is studying the prey/predator relationship between bottlenose dolphins and sharks by identifying shark bites on the bodies of the dolphins. The distinctive white bite marks give scientists an idea of the frequency and severity of the shark encounters, he said.

“I really was attracted to this program because it’s the longest running study of wild dolphin populations in the world,” Jordan said.

REU programs offer opportunities for undergraduate students to get research experience in their chosen field. For Jordan, 23, the REU is a dream come true. The Newton County resident, a member of the U.S. Marine Reserves, said he always wanted to be involved in scientific research with animals.

“From an early age, I was pretty much set on dealing with science in some form or fashion and enjoyed watching nature documentaries,” Jordan said. “My uncle is a wildlife biologist, and every summer he would visit, and he would point out different birds to me. I loved it and knew I couldn’t wait to do something with animals.”

Jordan’s work is divided between taking photos of the dolphins in the bay and poring through thousands of existing photos in the facility’s lab.

“We are graphing these data to determine if there are any trends in the number of shark bites each year,” Jordan said. “If we find there is a trend, we will investigate whether other events, such as red algae tides or dolphin population changes or human interaction, could be correlated to any changes in the frequency of shark bites.”

Jordan appreciates working with seasoned researchers in the program.

“The program not only shows you the process of how to be a scientist, but it’s structured to mentor you as well,” he said. “I’ve learned what is expected as an assistant when you are in the lab, and to understand guidelines and rules, both in a university and a professional lab. It’s been amazing.”

Because the program has been during the COVID-19 pandemic, participants have worn masks and socially distanced, traveling in three separate boats to gather their data, he said.

The last day of the summer program is Aug. 7.

After graduating from Perimeter College in December, Jordan plans to transition to Georgia State’s Atlanta Campus and study biology, eventually focusing on morphology — the study of animal body structures and their relationship to movement and function. He hopes one day to apply for an internship at the Georgia Aquarium to continue his marine animal studies.