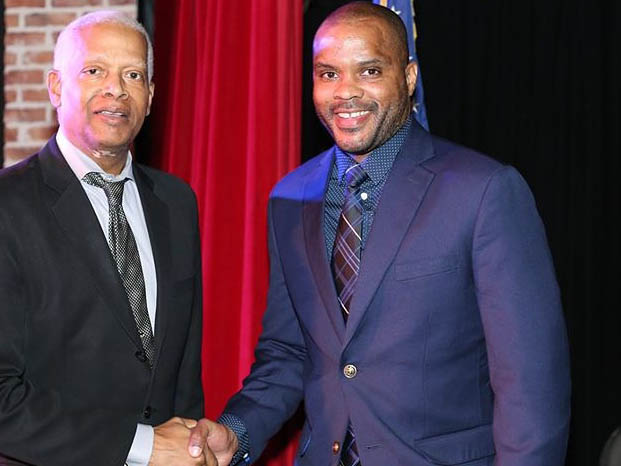 Melvin, 44, is one of about 300 students in the nation to receive a CBC scholarship, which is awarded to those who demonstrate leadership ability through exemplary community service and academic talent. The scholarship helps with tuition, books and living expenses.

Melvin is an Honors student on the Newton Campus who entered college in the fall of 2019. During the spring, the Stockbridge resident served as an intern with U.S. Congressman Hank Johnson’s Atlanta office. He balanced that role with his studies plus a job with Georgia State’s Campus Recreational Services, where he won a recreational services award for service excellence. When COVID-19 prompted health-related restrictions, all offices closed, but Melvin hopes to return to the internship and his campus recreation job in the fall, pending re-openings.

Melvin’s journey to college took time, but he knows he now is where he should be.

“I didn’t like the direction of my life,” he said.

Born in New York, he moved with his family to Wilmington, N.C., but his parents soon divorced. He graduated from high school, but struggled and made poor life decisions that set him back, he said. Melvin says the years between his teens and 40s were “long and complicated,” and hopes to one day write about them to inspire other young men.

“I’m a black male, and there is a laundry list of things black males can do better — and education is one of them,” he said. “Given the climate we are in now, there is a need for professional black males out there. I want to be an inspiration.”

When he made the decision to attend college, he was employed at a logistics company but wanted something else in his life.

“I knew it was always my intention to go back to school,” he said. “Finally, I told myself, it’s now or never.”

Melvin hopes to graduate in May 2021 with his associate degree and continue to Georgia State’s Atlanta Campus to finish his undergraduate studies. His goal is to pursue a law degree.

“I don’t view life in terms of how much money I want to make,” he said. “I look at what’s going to make me happy and be a better example to people around me.”

Melvin encourages others who may question if they are too old to go college.

“If you don’t like the direction of your life and are willing to put the hard work in, go for it,” he said.