Eli Cohen (J.D. ’20) always wanted a career in law & order. The Double Panther and Maryland native worked as a campus police officer to help pay for his undergraduate degree. After graduating in 2007, he joined the Army National Guard and worked as a police officer in Sandy Springs, Ga. for eight years. In 2016, he chose to fulfill his dream of practicing law, and he didn’t hesitate to return to Georgia State University. However, Cohen’s journey was not without challenges. After his second year, he was deployed overseas, and his final one, he was called to lead a team in Coronavirus relief efforts. Now, as he studies for the bar exam, and awaits the arrival of his second child this fall, Cohen is taking some much-needed time to exhale.

Did you do any externships or pro bono work in law school?

During my first year at the College of Law, I was still a volunteer police officer in Sandy Springs. The summer after my first year, I volunteered as a law clerk for Sen. Johnny Isaakson in Washington D.C. I feel like I was getting a turbo-charged version of “School House Rock”– how a bill gets passed. I spent a great deal of my time diving into the National Defense Authorization Act and how that affects Georgia, in particular. I got to sit behind the senator at a hearing on the authorization of use of military force in the Middle East, which was a cool experience.

You were deployed during law school. When you returned, how did you adjust back into classes?

I went on active duty right after finals my second year of law school, and we came back in May, so it did not overlap multiple years. The one thing I did do while I was gone is I took a non-law school graduate level class and which applied toward my degree, but did not impact my law school GPA. I took a graduate level political science class at Georgia State, which helped me get credit while I was gone. I came back and took a summer class to get back in the groove and then I took a full load until graduation. 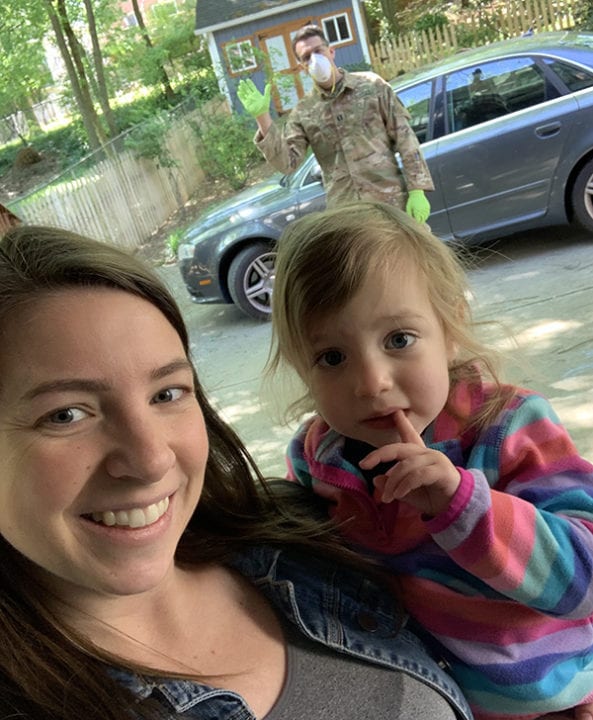 Cohen having a socially distanced visit with his wife and daughter during COVID-19 relief efforts.

How did Coronavirus impact your class schedule your final semester?

When COVID-19 first hit, I mostly worked from home for the Wetherington Law Firm and took a few classes. Then, on April 6, I was called by my National Guard unit to report the next day. I spent 30 days on orders in April with a chemical unit tasked with disinfecting nursing homes and long-term care facilities. The mission shifted a little bit to where they started running Coronavirus test sites. My wife is pregnant, so I couldn’t go home while I was on duty, so the military put me in a hotel for a month. Then, once I got a negative test result, I was able to go home to my wife and daughter. We have another baby due in September– 10 days after I take the bar exam.

What is your career goal?

Right now, I’m at Wetherington Law Firm, a small plaintiff injury firm, where I get to really help people. My ultimate career goal is to enjoy my work and see my family more than I see my co-workers.

Tell me what experience you had at GSU Law that you wouldn’t have had anywhere else?

I used to watch my friends walk from school to the Fulton County Courthouse where they tried cases, worked for the D.A. or were doing clerkships. There isn’t another law school in Georgia where you can walk out of class and into the largest courthouse in the state.