‘Who could ask for more?’: Radford reflects on 36 years at Georgia State Law

As Professor Mary Radford puts it, the College of Law was “just a toddler” when she joined the faculty in 1984. She’s survived many of the growing pains, and now, retiring after 36 years of dedication to the institution she watched grow, she finally has the chance to look back and reflect on her time.

Becoming a lawyer wasn’t always what Radford envisioned as her future career, but teaching was. When she was a child, she would set up a blackboard and lead lessons for her sisters. She taught at two high schools after college before realizing she wanted more of a challenge. Radford then studied for both the LSAT and GMAT, putting the question of whether she chose law school or business school in the hands of a standardized test.

“This will tell me which one I should go to,” she remembers. “Well, there was a one-point difference in my test scores, but my friend convinced me I’d like law school better.”

After earning her J.D. from Emory Law School in 1981, Radford practiced for a few years before she was ready to get back to her passion. She knew it’d be a risk taking a chance on the College of Law, which had been established only two years prior, but the opportunity to be in an intellectually challenging classroom persuaded her. 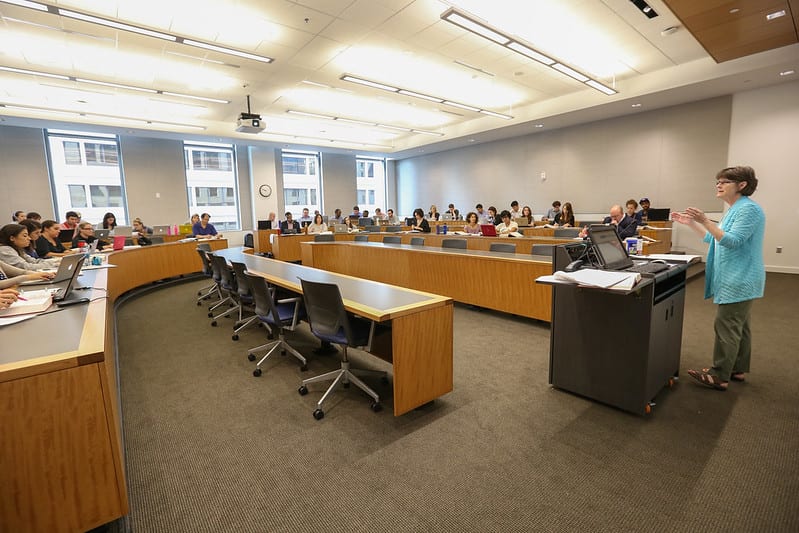 “I was hired because nobody in the current faculty wanted to teach Wills, Trusts & Estates,” Radford joked. “There was one professor teaching it, and my interview consisted of him standing in the door saying, ‘will you teach wills?’ I said ‘yes’, and he said, ‘okay, great’.”

Even though it’s a subject matter that was tossed to Radford without much choice, she enjoys it. “It’s people law,” she explains, saying it’s rooted in examining human nature and family dynamics. That is the same reason she likes teaching Law & the Elderly, and has based much of her scholarship around these topics.

“If you teach the same course for as long as I have, you think you know everything,” she said. “But inevitably, every semester, somebody trips me up and I have to rethink, and that’s good, it keeps me going.”

Over the course of her extensive career, there are a few things that stand out. Radford was the reporter for a group of lawyers who wrote reforms for Georgia’s probate code, guardianship code and trust code, which the state legislature adopted. She was also honored with not only being an elected member of, but becoming the first academic president of the American College of Trust and Estate Counsel.

But one of the more impactful experiences for her was representing a man on death row for nearly 25 years before he was executed, with whom she had been connected by the Georgia Resource Center. She has fond memories of getting to know someone most of society had rejected.

“He committed an awful crime, no question about that, but absent a gun, alcohol and drugs, this was just an ordinary kid,” she said. “I wish I could convey that to people. Everybody is a human with human weaknesses, but a lot of human strengths too. We can’t just dismiss them.”

Radford’s ability to create these influential relationships is confirmation that she was “born to teach.” Speaking like a proud mother, she also remains extremely humble when reminded she’s taught some of the legal profession’s brightest people.

“I just feel so privileged to have watched these people grow as lawyers, judges, partners in law firms and corporate executives,” she said. “Who could ask for more?”

Fortunately, Radford’s presence at Georgia State Law won’t be completely missed, as she will be back teaching the basic Wills course in the Spring semester and hopes to use the College of Law as a base from which to continue writing her treatises on Georgia trust law, probate law and guardianship law.

“It has been a phenomenal experience to take something from practically ground zero to being one of the most highly respected law schools in the nation,” Radford says, crediting the faculty. “They’re scholars, but they’re teachers first.”