Even though he was surrounded by more than 30,000 other students in downtown Atlanta, Lenval Duffus sometimes felt alone.

“I never really had an academic mentor growing up,” said Duffus, a rising senior from Snellville who is majoring in political science. “Every time I moved to a different stage (of education), I always had to figure things out by myself. So, it’s easy to get lost and feel like you’re alone.” 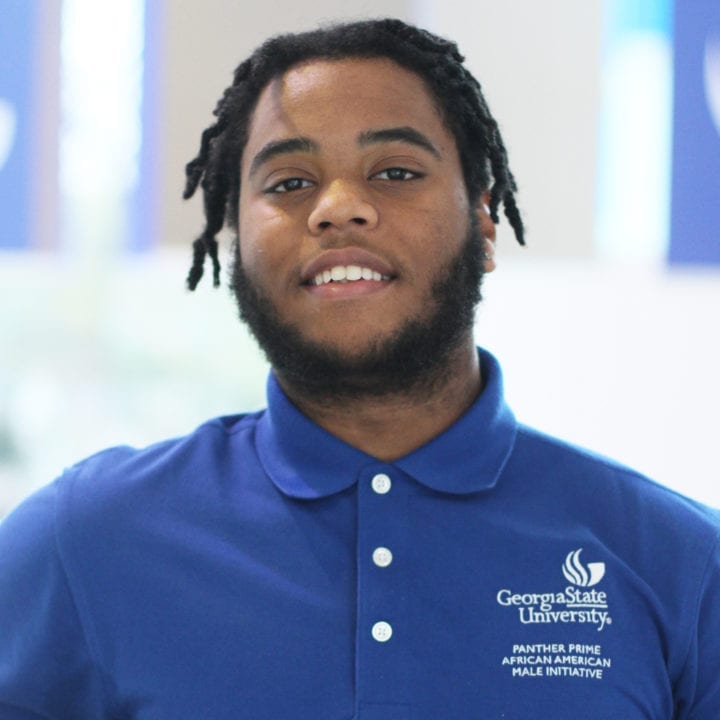 Duffus pushed through and made good grades, but he still longed for a sense of community and support. In the fall of 2019, he applied for and was accepted into Georgia State University’s African American Male Initiative program, known as Panther PRIME.

“It’s an exceptionally strong collective of black men from a variety of different backgrounds who constantly push each other toward high goals and foster each other’s academic and personal growth,” Duffus said. “It feels really enriching to be part of an organization that gives back to the GSU community while also speaking up on issues that affect the black community.”

This fall, Duffus will become the first-ever recipient of the Panther PRIME Scholarship, awarded by the Honors College at Georgia State.

“The purpose of the scholarship is to recognize the academic merit, leadership and service of members of the Panther PRIME cohort,” said Jacob English, associate director of Panther PRIME and director of the Office of National Scholarships and Fellowships in the Honors College.

The scholarship’s founding donor is Georgia State alumnus David A. Jackson (MBA ‘02), a senior advisor for community and economic development at the Federal Reserve Bank of Atlanta.

“This program (Panther PRIME) is important to me because as a graduate student at GSU, I saw the importance and need for peer-to-peer mentoring among fellow students of color pursuing their MBAs,” said Jackson, who also is a member of the Honors College Board of Advisors. “In fact, my executive MBA class of 50 only had five African Americans, and without our own peer-to-peer support, it would have been much harder to complete the program.”

Duffus said the $1,000 award will help him as he prepares to apply for law school—a goal that was partially inspired by his mother who worked as a paralegal in Kingston, Jamaica, before his family immigrated to the United States.

“Taking the LSAT, submitting law school applications—they’re not cheap,” Duffus said. “Getting the scholarship takes some of the stress off.”