Leila Lawlor (J.D. ’95) was destined to teach. As the daughter of two educators, she grew up with an appetite for learning and has been sharing it with students for more than 12 years. Her love for Georgia State Law began while she was a student here in the early ’90s. Now, as newly appointed director of the Academic Success Program and director of the Master of Laws (LL.M.) program in the College of Law, she helps practicing attorneys find new pathways in their careers, either by guiding lawyers trained in other countries as they prepare to take the bar, or supporting U.S.-trained attorneys as they learn a new specialty. A lifelong learner, in addition to her J.D., Lawlor has earned her M.B.A. and a master of science in criminal justice while teaching. She is working on a master’s degree in applied linguistics. Here, she shares her favorite memories from being a student and why she believes that the law community is like no other.

What made you want to go into practicing law?

When I was an undergraduate at the University of Georgia, we had this organization called the Defender Advocate Society. I volunteered to defend students who had been charged with academic dishonesty or other misconduct. That cinched my interest.

What was your favorite class?

As soon as I started, I loved every minute. It opened up my eyes to so many possibilities for correcting injustice. If I have to pick a favorite, it would be Constitutional Law or First Amendment with Lynn Hogue. He was just the greatest. It was fascinating to learn how the Supreme Court interprets and applies a grand, yet amazingly short, document that was written in the late 1700s, but which still speaks to us today, in determining many of the most controversial issues in modern society.

What led you to academia?

I was working as an attorney for DeKalb County in a dream job, but I missed the classroom, so I threw my hat in the ring to be an adjunct professor teaching business law at Georgia Perimeter College. My first classes were night classes, and I did that for a number of years, and then it became a full-time gig. I’ve been directing the LLM program for two years. Honestly, I had to pinch myself that I was teaching at this beloved place. 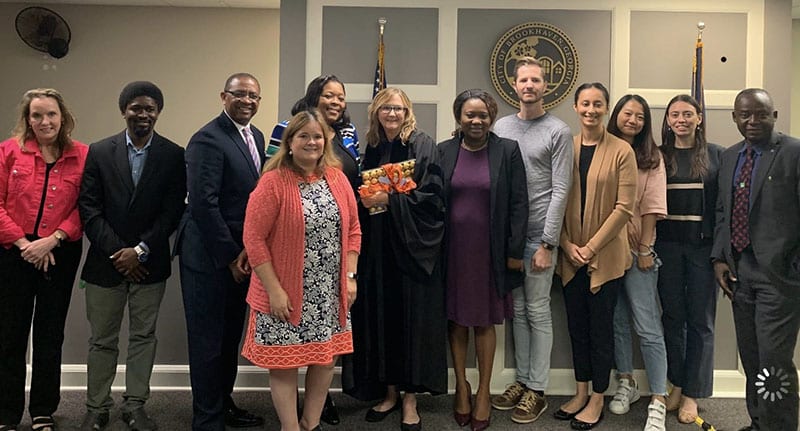 We often talk about the College of Law as a place of opportunity. How is the LL.M. program an extension of that?

LL.M. students voice to me all the time that Georgia State Law opened a door for them that they thought had been closed. For our foreign-trained lawyers, many of them were quite accomplished overseas. Then, they moved to Atlanta for relationships, jobs, family or some other reason. They think that they’ve given up their law practice, then they discover our program. It’s doable and they can complete it part-time while they’re working.

Consider how daunting it is for a multilingual student, for whom English is their third or fourth language, to learn American law in order to pass the bar. It’s a huge task for our J.D. students who have grown up learning in English. Our LLM students just buckle down and do it. They’re not along for the ride, they’re driving that train.

What do you think makes Georgia State Law unique?

In my case, I was working full-time and Georgia State Law offered a part-time program that allowed me to continue working while balancing law school and a family. Attending the College of Law can be life changing, and for many students, like me, part-time is the only possibility. Having said that, it’s also better than the others. I was taught by some of the founding professors of the College of Law. Because of their excellence, the school was strong from the start. Because of the reputation built by our most senior professors, the school has been able to attract a new generation of exceptional scholars to its faculty. This is also a faculty that cares very deeply about our students and their success. [One of my colleagues] told me jokingly that I have to quit giving out my cell phone number, but when I graduated law school, I kept in touch with my professors. Some of my law school professors are lifetime friends.