A lot of conversation in the national media about affordable housing focuses on places like New York City, Seattle and Los Angeles. While those cities face significant issues, millions of families across the nation struggle to pay rent and find themselves in eviction court, Lavar Edmonds, research specialist with the Eviction Lab at Princeton University, told about 130 academics, activists, faculty and students at a Feb. 21 lunchtime talk at the College of Law.

They’d gathered from across the country for the Georgia State Law Center for Access to Justice’s third annual State of the South conference.

The conference focused on housing justice because affordable housing is a timely issue, particularly in Atlanta, said Lauren Sudeall, the center’s founding faculty director. Participants looked at barriers to accessing affordable housing and at what tenants can do when they face eviction. The interdisciplinary Center for Access to Justice was founded in 2016 to offer research and education around access-to-justice issues in the South. 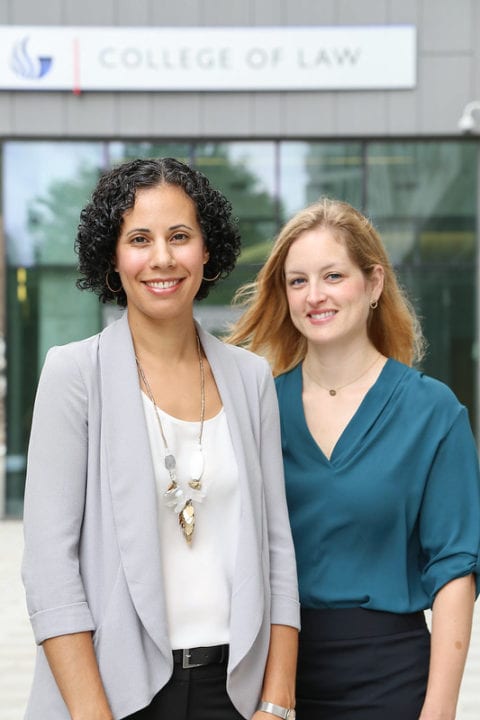 Edmonds described eviction as “an epidemic across the country. And one that requires national attention.”

His group has compiled the first national database on housing evictions with court proceedings. So far, they have found that eight of the cities in the U.S. with the highest eviction rates are in the South. They also found that renters in Georgia are twice as likely to be evicted as renters in other parts of the country.

The focus of Edmonds’ talk, and of the conference itself, dovetailed well with a significant aspect of the center’s purpose and programming: training the next generation of lawyers to serve the public interest. About half of first-year Georgia State Law students participate in the Pro Bono Program and many continue throughout their school years.

Student voluteers are a boon to the Housing Court Assistance Center (HCAC), in which the Center for Access to Justice joins forces with Atlanta-based nonprofits Lawyers for Equal Justice and the Atlanta Volunteer Lawyers Foundation to provide legal guidance to renters in Fulton County facing eviction. The HCAC is open six hours a week and while there law students, as well as volunteer lawyers, help tenants file answers to eviction notices.

Sudeall explained that tenants in Georgia have just seven days to respond to eviction notices and that complex legal language embedded in the notices can confuse non-lawyers.

“As lawyers, it is easy to get stuck in the mentality that this is just how we do things,” Sudeall said. “We understand this language because of our training. We also forget about the emotional and psychological stress a person may be under when they’re served with an eviction notice.”

The theme of the 2020 State of the South Conference focused on housing justice.

The work they do in their Pro Bono Program is underscored in a yearlong course, Access to Justice: Law Reform, which Sudeall teaches with assistant center director Darcy Meals. In the class, students propose solutions to the challenges people might face when navigating the court system. One solution, for example, might be rewording eviction notices to make them more understandable for tenants.

Through the Pro Bono Program, the center also offers alternative spring break trips. This year, trips included volunteer experiences with reproductive law, immigrant detention, rural justice, as well as opportunities to learn firsthand about housing instability’s effect on elementary-aged school children in Atlanta. Meals says that the trips give students an opportunity to see the law in action and to recognize themselves as potential agents for change, even as early as their second semester in law school.

In addition to service opportunities for students and events that educate the public, the Center for Access to Justice is home to innovative researchers who investigate an array of topics related to how underserved populations interact with the legal system.

When it comes to eviction, most research tends to focus on urban areas. Sudeall and Daniel Pasciuti, Georgia State assistant professor of sociology, are working in an overlooked arena: exploring how eviction proceedings play out in areas of Georgia outside Atlanta. Their work examining dispossessory courts, which handle eviction proceedings, is funded with a research initiation grant from Georgia State as well as an American Bar Endowment Opportunity Grant.

With myriad courses and programs, the center’s aim is to be a regional and national hub for access to justice research and education. Their focus on housing justice is an extension of that goal.

“We’re always thinking about how access to justice questions being asked elsewhere are manifesting in this part of the country, which is both underresourced and understudied,” Sudeall said. “With our research, we hope to make some progress toward answering those questions and understanding what elements of the dispossessory process frustrate or facilitate access to justice.”*