Alex Estroff on the importance of Pro Bono work

While Alex Estroff was earning his undergraduate degrees in journalism and political science at the University of Georgia, he aspired to pursue a career in sports. But, after taking Communications Law, he recognized that he liked the law just as much, so his plans changed. Upon graduation, he moved to Washington, D.C. where he interned for Congressman John Lewis for six months– an experience that he says helped prepare him for law school. While there, Estroff says that Lewis emphasized the importance of speaking up and taking action in the face of injustice. With this mantra in mind, he applied to Georgia State College of Law, and he has been involved with the Pro Bono Program since his first year. He has volunteered with the Atlanta Volunteer Lawyers Foundation; participated in an Alternative Spring Break Trip at Stewart Detention Center; and is now the student director of the Pro Bono Program. Here, he discusses his passion for service.

Where does your passion for service and politics come from?

It’s something that was instilled in me by my parents and grandparents. As you advance in life, I think that you have an obligation to give back and do what you can to help out. My grandparents were influential in teaching me the importance of giving back. It’s something that I always try to maintain wherever I go.

How did you get involved with the Pro Bono Program and what do you do as student director?

I began volunteering my first semester with the Atlanta Volunteer Lawyers Foundation Safe & Stable Homes Project. I went to a few shifts and I liked it a lot. Second semester, I spent a week at Stewart Detention Center in Lumpkin, Georgia on an Alternative Spring Break Trip helping the Southern Poverty Law Center advocate for immigrants who were being detained. Stewart Detention Center was eye-opening. Everything around immigration is politicized right now, but the thing that most people don’t get to hear is the stories of people and how they got here.

As student director, I help connect students with volunteer opportunities with different legal organizations across the state. It’s different from an internship or externship because students can sign up for a two to three-hour shift, so it’s catered toward the needs of law students who may not have a lot of time. This year, we’ve had more than 950 hours of student pro bono work. 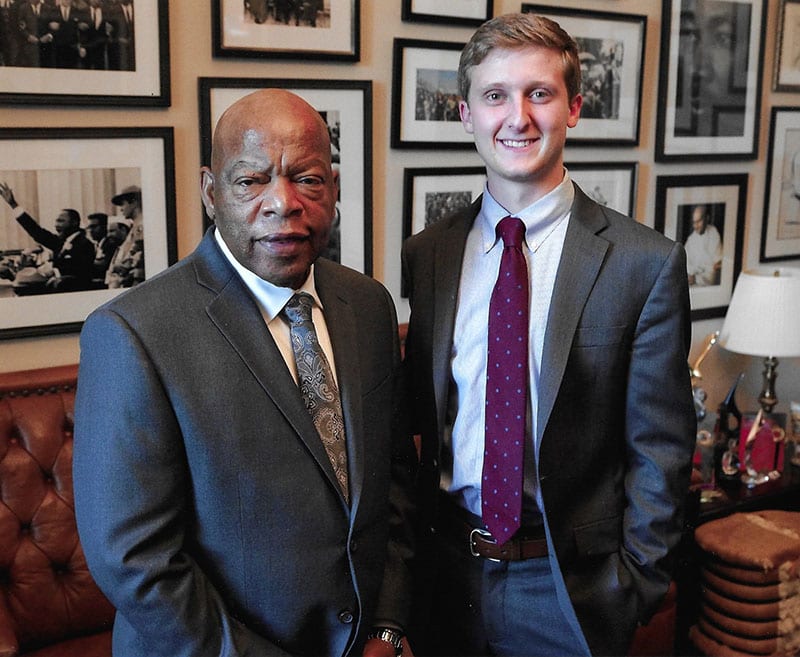 Estroff posing with Rep. John Lewis (D-GA) during his internship in 2017.

Have you participated in any internships/externships/clinics or other experiential learning opportunities?

Right now, I’m externing for Judge Jill Prior at the 11th Circuit Court of Appeals. I applied through the school’s externship program, which made it very easy. Plus, the College of Law is a five-minute walk from the Court of Appeals. Prior to the [Coronavirus pandemic,] I was doing research and writing for Judge Prior’s opinions, watching oral arguments and helping with bench memos. Just talking with Judge Prior and her clerks was the most valuable part of it, because you get to hear how a federal judge thinks about [various legal issues].

What experience have you had at GSU Law so far that you don’t think you would have gotten anywhere else?

First and foremost, the community and the students. It might be kind of cliché and trite to say, but I’m continually in awe of my fellow students. There are so many students from different walks of life, and I don’t know if other schools have that diversity. Coupled with that, professors really care about how students do. Georgia State has such a strong commitment to serving the community.

What advice would you give someone who is considering law school?

If you’re considering law school, I would say think carefully about the decision. It’s a lot of work, but it teaches you skills that you can use anywhere in life. I also have to emphasize how impressed I am by my classmates. You’re going to work hard anywhere you go, but one of the things that makes Georgia State worth it is being around people you enjoy being around.