Walking into professor Corneill Stephens’ Contracts II class you can hear a pin drop. A sense of nervous anticipation fills the room as he randomly calls on students to play the role of attorneys in addressing various contract doctrines. He addresses students as a judge would in court, challenging them to think like the lawyers they will soon become.

“Mr. Patel, recite the parol evidence rule…How would you apply it in this case…What is your response as opposing counsel. . .”

“Miss Jones, how do you enter parol evidence if there’s no gap in the contract?”

And then, a break. “Miss O’Kelley, I met your father today. He demanded that I call on you.”

His teaching style is a masterclass in the art of tension and release, one that comes from 35 years in the classroom and the courtroom.

“I am so thankful for his teaching style because it forces me to over prepare for each class and focus on each topic we are learning,” said Sarah O’Kelley, a first-year law student. “I know I will carry the lessons I gain from this class through my law career.”

Born and raised in Los Angeles, Stephens got the urge to go to law school after taking a constitution law course at Claremont College. From there, he attended the University of Chicago Law School and moved to Atlanta to work as a litigator at Troutman Sanders before joining the College of Law faculty. In addition to teaching, he served as a part-time judge in DeKalb County from 1985 until retiring at the end of 2018. At the College of Law, he has done almost every job, including associate dean of academic affairs from 1993-1997.

And, he’s showing no signs of slowing down. He spearheads the Georgia State Chapter of the Order of Barristers, a national honorary organization that recognizes students who have excelled in advocacy, including Mock Trial and Moot Court. He is the director of the Advocacy Program and he is one of the advisors of the Bleckley Inn of Court. 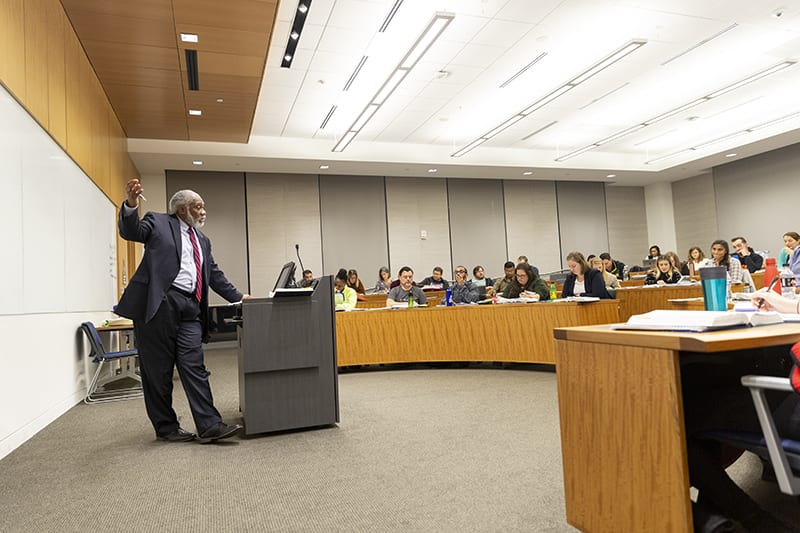 “I like the interaction, courtroom drama and extracting information from willing and hostile witnesses,” Stephens said with a wry grin. “I like being involved in the adversarial system.”

He also created a Certificate in Advocacy, which launched this spring, to enhance the College of Law’s nationally-ranked Advocacy Program. Racquel McGee, who is Stephens’ graduate assistant and in her final semester of law school, helped Stephens write the proposal for the advocacy certificate and says that Stephens’ Sales class is still one of her most impactful classes.

“I can recite Article 2 of the U.C.C. to you backwards and forwards because he presented in a way where you had to learn it.” said McGee. “He made it easy. By far, he’s one of my favorite professors.”

Stephens’ authoritative tone is underscored by a deep caring for his students and passion for litigation. They squirm in their seats in the classroom so that they will be calm and confident in the courtroom. It’s all a part of his commitment to help them become the best possible lawyers.

With respect to the advocacy certificate, Stephens remarked: “Our students are on a mission to become the best possible lawyers and they are committed, enthusiastic and intelligent. With the Certificate in Advocacy, students are getting transferable lawyering skills, and we are using litigation as a vehicle to sharpen them.”