Georgia State associate professor of law Courtney Anderson always knew she wanted to be a lawyer. Originally from Minnesota, Anderson headed to the east coast to begin her educational journey. First, she earned a B.A. in finance from the University of Pittsburgh which she followed immediately with attending Harvard Law.

While in law school, she did a variety of different clinicals and found interest in transactional work. She spent four years at a firm specializing in real estate, before deciding to pursue her LL.M. at Georgetown University Law Center—all while doing a fellowship in clinical teaching.

“I wanted to do something that allowed me to use my real estate and housing background, but also explore other social justice interests,” said Anderson.

It was the Second Century Initiative, now known as Next Generation, which brought Anderson to Georgia State University. The initiative is a collaborative program prioritizing interdisciplinary research. Anderson focuses on health disparities related to socioeconomic determinants of health. Simply put, Anderson said she’s interested in “how having affordable housing affects health and quality of life.”

Since starting at Georgia State in 2012, Anderson has developed a course in law, health and equity, and also teaches real estate transactions and property. She said an advantage to being in Atlanta is having students that care about their community and want to remain attached to it.

“The great thing about Georgia State—in addition to the students and working atmosphere—is it’s in the city of Atlanta,” Anderson said. “Being in a progressive, metro setting is a great opportunity for different research and community engagement.” 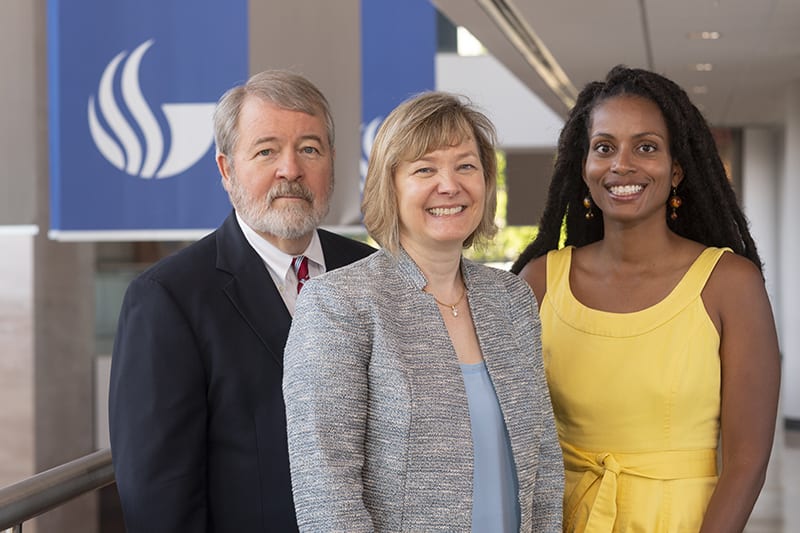 A first for Anderson this semester is teaching undergraduate students. The Greenwall Foundation awarded the College of Law a grant to create a model undergraduate bioethics course. Anderson developed the course alongside Interim Dean Leslie Wolf and Distinguished University Professor and professor of law Paul Lombardo.

“The course allows students to look at how bioethics impacts other areas of their lives,” Anderson said. “Specifically, how it’s involved in creating and shaping laws and policies. We talk about how principals of bioethics apply for social justice issues like housing, education, and discrimination.”

Anderson enjoys this new experience for the variety of students it brings into the classroom. She said while some students are studying pre-med, others are accounting or even theatre majors, a big change up from the law students she’s taught for years.

“Teaching undergraduate students is new, they’re really curious and have a variety of interests, which makes it really unique,” said Anderson.

The new course aside, bioethics is at the heart of Anderson’s scholarship. She’s currently writing a paper about community lawyering and bioethics, while also incorporating the topic into much of the research she is doing. Even with a full docket, Anderson manages to find the time to work on housing discrimination cases.

While completing the development of the bioethics course would mark the finish line for most, Anderson isn’t done yet. Her next step is finding a way to bring it to students around the country.

“I think it’s working really well here,” Anderson said. “The students seem to like it a lot and they’re getting a lot of out of it. I’d like to work on replicating that at other universities and expanding the course – maybe adding a clinical component – something like that.”