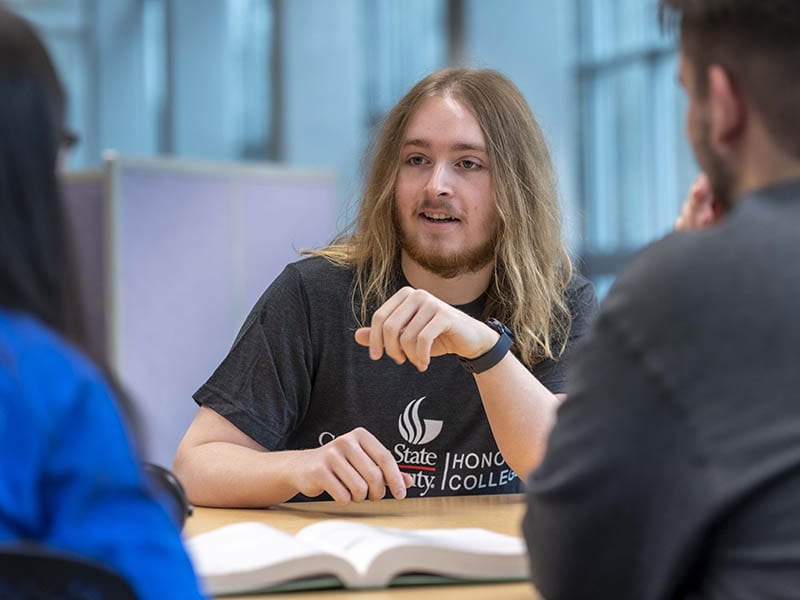 COVINGTON, Ga. —Alex Kendrick loves history so much that he turns to history textbooks for casual reading. As a Newton Campus student at Georgia State University’s Perimeter College, Kendrick also enjoys tutoring students in history and spending time with his history professors, soaking up their knowledge of the past.

During his years as a home-schooled high school student, his goals weren’t so clearly defined.

With his parents divorced and his family in financial straits, he felt unable to dream big, he said.

“I … frankly, lacked ambition,” Kendrick said. “Everything became very present-focused: I was concerned only with what was going on that specific day, and I didn’t want to stress myself out by thinking about the future.”

It wasn’t until his friend pushed him to take the SAT that he saw a chance for a different life. He did well and chose to come to Georgia State University’s Perimeter College, for its affordability and the Newton Campus’s proximity to his home in Covington.

Now he is making his own history, as an Honors student and one of 12 semifinalists for the national Jack Kent Cooke Undergraduate Transfer Scholarship, an award for the country’s top community (two-year) college students seeking to complete their bachelor’s degrees at four-year institutions. Recipients of the award receive up to $40,000 per year for up to three years, placing the scholarship among the largest private offerings in the country.

The news of achieving semifinalist status for the JKC scholarship was incredible to Kendrick, who once had doubts of attending college at all.

“When you have doubts, or when you don’t really think you’re actually capable of doing something, you lose all your motivation to try,” he said. “I saw no way to fix my situation. I still wanted to go to college, but I thought I’d lost my shot.”

Kendrick’s best friend and Kendrick’s father encouraged him to look to the future and apply to college, he said.

“My friend is an amazing student with extraordinary motivation,” Kendrick said. “My dad has always encouraged me academically. I’m not sure I would have come out of that awful slump period if it wasn’t for them.”

Kendrick, who has a 4.0 GPA, has taken nine Honors courses and is a supplemental instructor (in-class tutor) for history. He also is president of the campus History and Current Events Club

He was encouraged to apply for the Jack Kent Cooke scholarship by several of his professors, and they helped him navigate the application.
“Alex is one of our top Honors students, college-wide,” said Dr. Joseph Bagley, who is Honors coordinator and history professor on the Newton Campus. “He is currently serving as an SI (supplemental instructor) for me and as the campus student assistant for Honors. He has taken the initiative of presenting at the Georgia Collegiate Honors Council conference in Milledgeville (Ga.). He is an incredibly hard worker and wise beyond his years. He’ll make a fine professor of history someday.”

After graduating from Perimeter College, Kendrick plans to pursue his bachelor’s degree, master’s degree and doctorate in history. He hopes one day to pay his professors’ support forward — and help students like him to achieve their dreams.