College of Law students, faculty and alumni were in attendance for the 65th Henry J. Miller Distinguished Lecture held in the ceremonial courtroom Thursday, March 5.

Dorothy E. Roberts, George A. Weiss University Professor of Law and Sociology and the Raymond Pace and Sadie Tanner Mossell Alexander Professor of Civil Rights at the University of Pennsylvania, delivered the lecture on the topic of abolition constitutionalism.

Roberts joined the Penn Law faculty in 2012 and is the founding director of the Penn program on Race, Science & Society in the Center for Africana Studies. In 2017, she was elected to the National Academy of Medicine. Other recognitions include the Society of Family Planning 2016 Lifetime Achievement Award and American Psychiatric Association 2015 Solomon Carter Fuller Award.

The speaker for the Miller Lecture is chosen each semester in order to highlight significant areas of interest for the legal profession. Georgia State Law professor Paul Lombardo says professor Roberts was selected because of her diverse scholarship in race, law, and medicine.

“She is an internationally celebrated legal scholar whose work reaches across several disciplines,” said Lombardo, who is the Regents’ Professor and Bobby Lee Cook Professor of Law at Georgia State. “It is a bonus that she will be addressing questions of criminal law and correctional policy on everyone’s short list of critical social issues that this country must confront.”

Her lecture on Thursday was titled “Abolition Constitutionalism”, and was based on the forward she wrote for the Harvard Law Review’s 2019 Supreme Court issue. 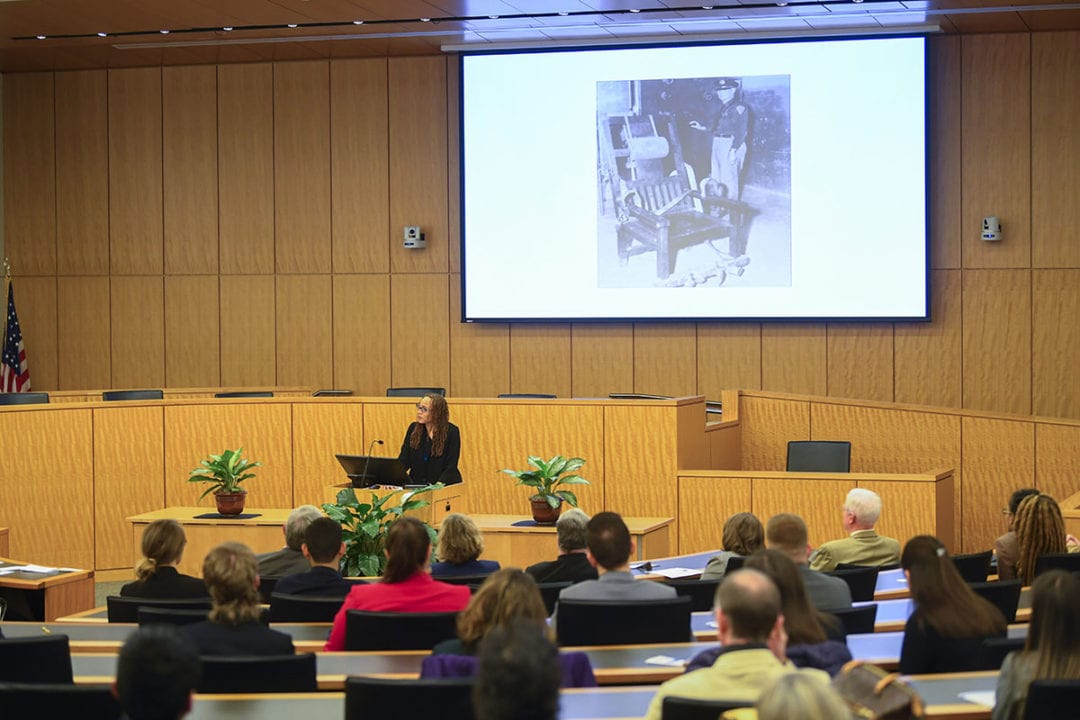 Roberts’ lecture analyzed prison abolition theory and connected this concept to the history of the 13th and 14th amendments, which abolished slavery and mandated equal protection of the law in the states. She then discussed whether the constitution can be seen as a document to support abolition.

“Prison abolitionists seek to dismantle this entire carceral regime and replace it with a radically different way of running society,” Roberts said. “A society where people’s needs and problems are met not by locking them up.”

Roberts said the incarceration rates in the U.S. are unheard of. In the past 40 years, the incarcerated population exploded from about 500,000 to 2 million people. That is a higher rate than any other country in the world, and most people sentenced to prison in the U.S. are from historically marginalized groups.

“Tracing the function of today’s carceral punishment system from the institution of slavery to its present-day subordination of black and other marginalized people suggests that the system’s repressive outcomes don’t result from systemic malfunction,” Roberts said. “This is a way that marginalized communities have been controlled and repressed and punished from the time of slavery until today.”

She argues prison abolition wouldn’t work by immediately tearing down the prisons. The theory is that prisons will only cease to exist when social, economic and political conditions eliminate the need for them.

The Henry J. Miller Distinguished Lecture Series is supported by the Charles Loridans Foundation Inc. and named for the late Henry J. Miller, a partner in the law firm of Alston & Bird for more than 50 years. The lecture is held in the fall and in the spring each year.