Paul Lombardo: at the intersection of law and ethics
Use Scan QR Code to copy link and share it

Georgia State Regents’ Professor and Bobby Lee Cook Professor of Law Paul Lombardo is known across the globe for his work on the legal history of the American eugenics movement, but what’s now the focal point of his career actually came about by accident.

“I was a graduate student who was taking a course in bioethics and I needed to do a paper,” said Lombardo. “I happened to be having breakfast at some greasy spoon and there was a newspaper with an article about this case that had just hit the federal courts involving a woman who had been sterilized under a state law in the 1920’s.”

The case, Buck v. Bell, took place in the same town where Lombardo was attending the University of Virginia. After some digging, he discovered the records of the case and of the lawyer who had written the law in the university library. For his PhD dissertation, he analyzed how the law had failed Carrie Buck, giving Constitutional endorsement to practice eugenic sterilization. That case ultimately launched Lombardo’s law career.

“Buck v. Bell has lessons about the way the law can be an instrument of injustice rather than justice and about pushing back on narratives that are bogus and advocating aggressively for the people you’re representing whether or not they’re rich and powerful,” said Lombardo. “It drew me to the study of health law, where many important cases require the balancing of ethical principles to reach a policy goal.”

Lombardo practiced in California for six years before returning to University of Virginia on the faculty of the School of Law and Medicine for 16 years. In 2006, Lombardo joined the faculty at Georgia State Law as a member of the Center for Law, Health & Society. He teaches courses in Genetics and the Law, the History of Bioethics, Mental Health Law and the History of Public Health Law. 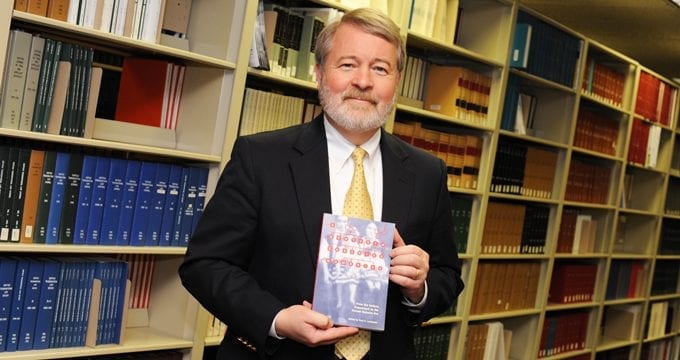 Most recently, Lombardo published a case study on the U.S. Public Health Service STD experiments in Guatemala from 1946 to 1948. He also finished a manuscript on a 1909 Public Health case involving quarantine orders for a woman with leprosy in South Carolina. Currently, he is working on the second edition of his book “Three Generations, No Imbeciles: Eugenics, the Supreme Court and Buck v. Bell”.

One thing that’s been surprising to Lombardo is the amount of change, both with the state of public consciousness and legally, that have continued to shape his career.

“My career has sort of played along with that developing story about genetics and history, discrimination, disability and all those other topics,” said Lombardo.

Though ultimately, it’s Lombardo’s students that come to mind when asked what he’s most proud of. He says he feels an obligation to get history right because it’s often a lot messier than what students have been taught, and it’s important they understand that as they navigate law and ethics.

“I’ve had so many good students, I continue to have good students,” said Lombardo. “Some of them get all A’s and some of them get no A’s and go on and have wonderful careers. It’s not about getting the gold star. It’s about doing the thing you figured out you can do well and using it in a way that is most satisfying. Our students do that and that’s enormously fulfilling for me.”