It’s a bird. It’s a plane. It’s an e-scooter?
Use Scan QR Code to copy link and share it

Since e-scooters arrived in Atlanta in spring 2018, roads and sidewalks from midtown to downtown have been abuzz with the devices, which provide a fast, fun and affordable transportation alternative.

According to Karen Johnston (J.D. ’08), associate director of the Center for the Comparative Study for Metropolitan Growth, the improved walkability of the city’s streets, connectivity to public transit and moderate year-round weather make it an ideal location for the vehicles, which are popular with Georgia State students.

And while whizzing past standstill traffic at 15 miles per hour is an alluring transit option, the influx of thousands of e-scooters⁠—estimated to be as high as 12,700 at one time—is also polarizing, sparking debate about safety and accessibility.

“E-scooters are a new urban issue for cities around the world,” said Johnston, and because of their swift and sudden entry into the market, there were initially no regulations governing their location, storage or use.

Just before Atlanta hosted the Super Bowl in 2019, City Council passed an ordinance regulating e-scooters. Regulations included: requiring operating permits for vendors, fines and impounding for improperly parked devices, limiting speeds limits banning use on sidewalks. Vendors are also required to share use data with the city and engage in equity planning to promote access to the devices in underserved neighborhoods. Following four e-scooter related deaths in August 2019, the city issued a nighttime ban on e-scooter use and a moratorium on further vendor permits. Gotcha, Lyft, Lime and most recently, Bolt abandoned the city, citing inability to make a profit in the presence of new regulations. 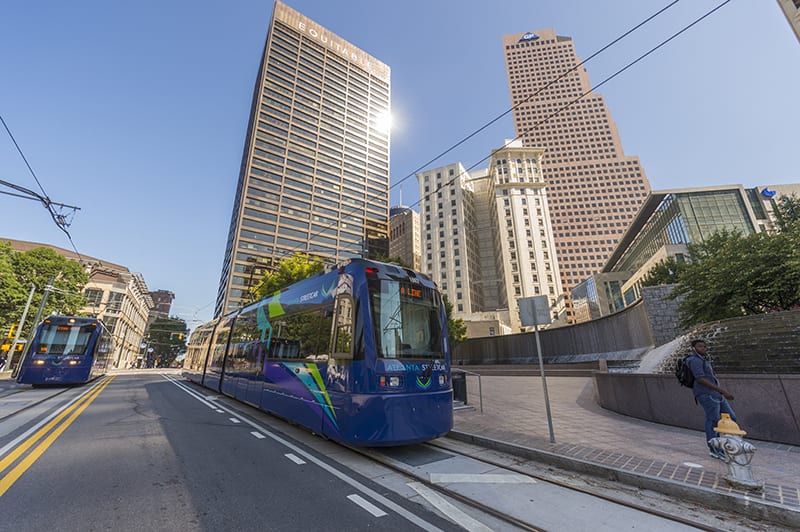 Johnston and Stacie Kershner (J.D. ’08), associate director of Georgia State’s Center for Law, Health & Society, are part of an interdisciplinary research team studying the legal, health and urban planning issues caused by the advent of the e-scooters. They recently applied for several grants to support their efforts. Atlanta is an ideal city for this research because its infrastructure is designed almost exclusively for automobiles, yet it has one of the highest ratios of e-scooters per capita in the U.S. and also leads the country in income inequality.

The latter is of particular interest to the pair as they study equity requirements on e-scooter operators along with how other cities are managing regulation of the devices.

“Several cities, like Atlanta,” Kershner said, “have equity plans regarding location of distribution of equipment, cash payment options and reduced rates for low-income riders, but the language is sometimes aspirational and doesn’t always include enforcement mechanisms in the ordinances.

“For many, adding on the cost of first/last mile transportation would still be a significant impact to their personal finances when the average single [e-scooter] ride costs more than a MARTA trip.”

Students in the interdisciplinary Urban Micromobility Studio course, where Johnston and Kershner are guest lecturing this spring, will be learning about these and other micromobility concerns from a regulatory, sociological and planning perspective and conducting on-campus research.

“E-scooters have swiftly changed the conversation around transportation planning in cities from car-centric to planning for all users–pedestrians, cyclists, scooters and cars,” said Johnston. “Not since the arrival of bikes and automobiles have we experienced such rapid change.”