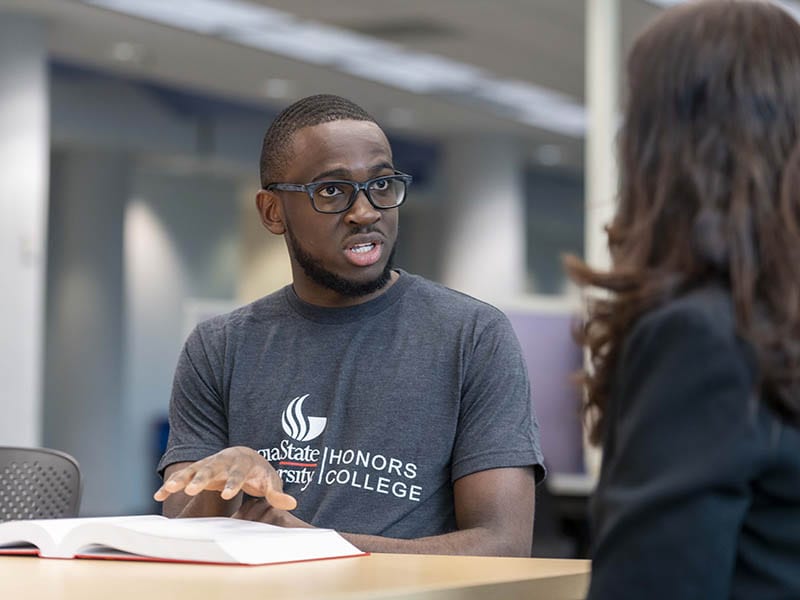 CLARKSTON, Ga.—Few things bring Nestor Kaputo more joy than mentoring boys and girls who arrive in the United States after fleeing war and political upheaval in their home countries.

Kaputo is an international student from the Democratic Republic of Congo (DRC) and a recent graduate of Georgia State University’s Perimeter College. Since coming to the United States to attend school four years ago, he has served as a treasured mentor and tutor for youth participating in the Inspire program at Shalom International Ministry in Stone Mountain, Ga. Most of the immigrant children attending the after-school program are refugees from Africa.

“If we’re given the opportunity to give freely, we should do it,” Kaputo said about dedicating at least three hours each week to the program at Shalom, his adopted community and where he serves on the leadership committee.

“It makes me complete.”

Kaputo is a semifinalist for the 2020 Jack Kent Cooke Undergraduate Transfer Scholarship — an award for the nation’s top community (two-year) college students seeking to complete their bachelor’s degrees at four-year institutions. It provides recipients up to $40,000 per year for up to three years, placing it among the largest private scholarships in the country.

Kaputo received his associate degree in engineering from Perimeter in December, just after applying for the Cooke scholarship. In one of his scholarship essays, he explained his commitment to connecting with the boys and girls at Inspire.

In 2007, Kaputo was 12 years old and attending school, when a fierce battle between warring factions in the DRC erupted in the street just outside his classroom in Kinshasa, the country’s capital. Amid explosives and gunfire, chaos ensued as students and teachers began fleeing the building, desperate to cram into the only bus leaving the city. Kaputo made it on the bus and safely home, where he lived with his parents and three siblings.

Kaputo remembers that day as though it were yesterday. But instead of letting the memory torment him, he uses the experience to connect with students who’ve had similar experiences.

At Inspire, he coaches boys and girls in recreational soccer and helps them with homework, while also addressing social issues they may have as new American residents.

“It’s very hard to adjust,” Kaputo said, noting that many of the children he mentors have endured worse experiences than he did.

“I want to show them that it is possible to move forward and to leave whatever happened in the past … it’s not impossible,” Kaputo said.

Kaputo is an excellent role model for the children he mentors, said Natalie Schmucker, who served as program coordinator for Inspire, which she says gives students “a safe place — a place to belong and build confidence.”

“That he’s a college student is an inspiration,” she said.

Kaputo excelled at Perimeter College. In addition to being recognized as Student of the Semester in subjects such as Differential Equations, Linear Algebra, Physics and Astronomy, Kaputo received numerous other awards and Perimeter scholarships. He also visited Washington, D.C., last year as part of a Presbyterian Church, USA delegation that advocated on Capitol Hill for the protection and expansion of voting rights in the United Sates and to support democratic endeavors in other countries.

He now works as a manufacturing engineer co-op student at an Atlanta-area company and helps to financially support his three younger siblings also studying in the United States — one is at Georgia State’s Atlanta Campus and the other is preparing to enroll at Perimeter.

Kaputo will resume his studies this fall at Georgia Tech, where he’ll major in computer engineering with the ultimate goal of working in cyber security.

In the meantime, Kaputo continues volunteering at Inspire, where he recently was encouraged by a letter in which a program participant spoke of Kaputo’s positive influence.

“We always need inspiration from someone or something to be successful,” Kaputo said.

Editor’s Note: Nestor Kaputo decided to continue his education at Georgia State’s Atlanta Campus, where he is working to complete his bachelor’s degree in computer science. (Feb. 25, 2021)