The story started more than a year ago with an Uber driver, her desire to return to college and a kind stranger who needed a ride.

But the tale of Latonya Young, who earned her associate degree from Georgia State University’s Perimeter College in December thanks to the generosity of her passenger, continues to capture the interest of readers, viewers and listeners around the world. Young and her rider, Kevin Esch, will appear on “The Ellen Show” today. During the segment, (watch here) host Ellen DeGeneres surprised the pair with gifts. Young received a $25,000 check and a trip to an NFL game, and her passenger, Kevin Esch, received a trip to a destination of his choice.

Since the story was originally reported in The Atlanta Journal-Constitution a month ago, Young’s experience has been recounted in hundreds of national and international publications and broadcasts, including pieces by People, CNN and ABC’s “Good Morning America.”

“I’ve been getting calls from reporters all over the world,” Young said. “I mean they’ve reached out from India, Europe and Africa and,” she added with a laugh, “they don’t care when they call.” 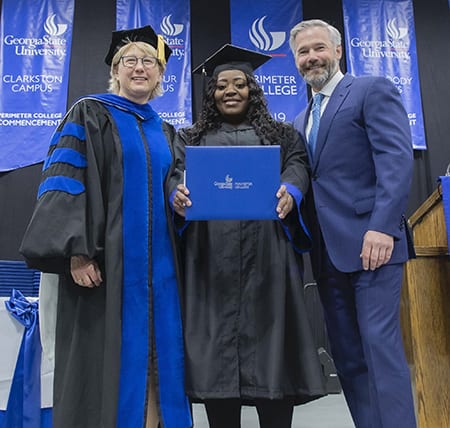 Latonya Young, center, shows off her degree alongside Georgia Perimeter College Dean Nancy P. Kropf, left, and Kevin Esch, the Uber passenger who paved the way for her to finish. (Photo by Bill Roa)

That’s just fine with Young, 43, who wants her meeting with the stranger-turned-hero to inspire as many people as possible.

That stranger was Esch, an estate manager in Atlanta. He and Young met in the summer of 2018 when she was driving for Uber and picked up Esch, who requested a ride after an Atlanta United soccer game.

During the drive, they talked about a variety of topics, including the reason Young had stopped studying at Perimeter College after getting her GED. She explained to Esch there was a hold on her college account because of an unpaid student bill.

A single mother of three sons, Young also shared that whenever she saved enough money to pay the bill and re-enroll, she’d have to redirect her spending to family needs or medical bills from surgeries she’d undergone.

They exchanged goodbyes, with Esch wishing Young well and asking for her business card. The following week, he visited Georgia State and paid off the $693 that Young owed the university — paving the way for her to start school again.

Young, who affectionately refers to Esch as her “Power Ranger,” calls it the nicest thing anyone has ever done for her.

“[He] gave me the drive to go do it,” Young said of returning to school.

Esch is humbled by how what he considers a small gesture of kindness has sparked so much interest. He has participated in joint appearances, including joining Young in Los Angeles for “The Ellen Show” taping. The pair also have been contacted by producers from “The Kelly Clarkson Show.”

“There have been so many incredible messages of love, gratitude and support it has been overwhelming,” Esch said of feedback he has received from the media coverage.

What’s more, he and Young have formed a special friendship. They kept in touch throughout her studies, with her giving him updates on her progress.

“I didn’t want to disappoint him,” Young said.

Young told Esch she wanted to pay him back the money he spent to clear her account, but his only wish was that she study and graduate. On Dec. 18, with family, friends and Esch attending, the Tifton, Ga., native became the first in her family to graduate from college.

Young feels she has come a long way since her days as a teen mom and high school dropout.

“I was so disappointed in myself with that, and I just felt that I was missing something as far as my education,” she said. “I had this something in my life that I wanted to finish.”

Meanwhile, she’s hoping the flurry of media attention will settle down soon.

Check out the media coverage below: