When junior Jack Briggette took on an internship with the Woodruff Park Project, he never imagined he’d become an advocate for a forgotten community.

On sunny afternoons, you could find him in Woodruff Park pushing around a little green cart. 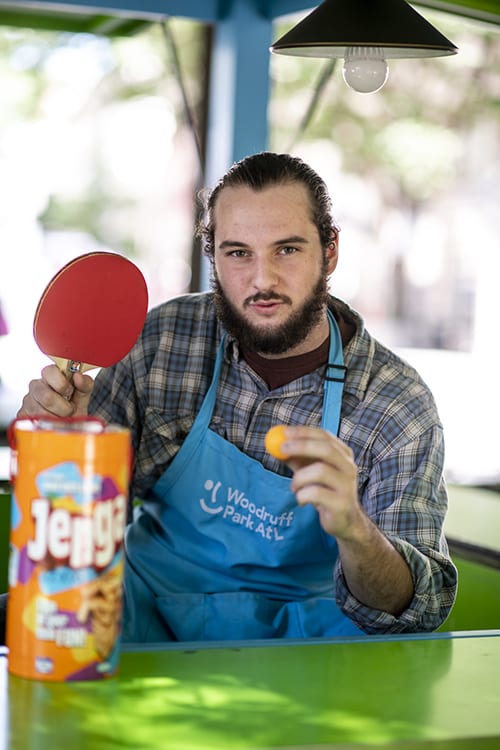 From spring to fall, junior Jack Briggette was the keeper of “The Game Zone,” a special space at the heart of the park where patrons can get to know one another while playing board games and untangling brain teasers at picnic tables. Briggette’s cart was at the helm, piled high with chess boards, table tennis, Chutes and Ladders and the like.

In the zone, which the Woodruff Park Project created in 2017, anyone interested can grab a game and play a round or two for free. Sometimes, if there’s a big enough crowd engaged, a game might remain in play for hours.

Briggette discovered the zone as an internship opportunity at the Andrew Young School’s Spring Career Fair last March. By August, the social work major was more than a game courier. He’d become a confidant for the park regulars, particularly those who were facing homelessness and other hardships.

“I spent a lot of time talking and listening to the guys,” Briggette said. “Sometimes they’d ask me for help.”

He often pointed them to Janika Robinson, a case manager for the social service agency Hope Atlanta, headquartered across the street from the park. Robinson helps connect impoverished and homeless locals with key resources. She provides case management services and referrals for supportive housing, public assistance, shelters and treatment programs. On rainy days, Briggette would shadow Robinson in her office.

His presence in the park became so powerful, Woodruff Park project manager Ansley Whipple decided to extend the internship to a work-study program.

“He’s incredibly friendly and helpful,” Whipple said of Briggette. “He’s done amazing work and helped make The Game Zone the best it’s been since we launched.”

The experience was equally rewarding for Briggette. The relationship he’s built with Robinson has been invaluable practice for what he eventually plans to do in his social work career — provide immigrants, refugees and the homeless population with access to aid and safety.

“I just want to keep people’s hopes and dreams alive,” he said.