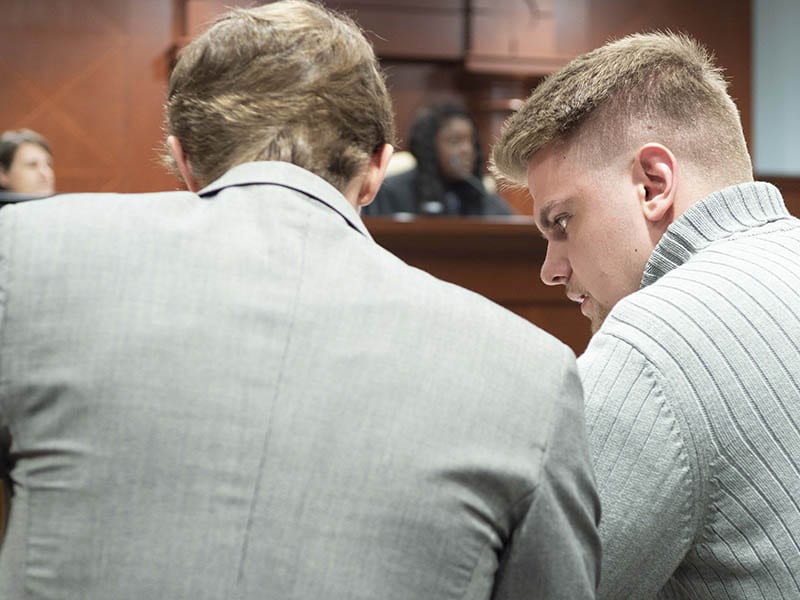 On trial was a middle schooler, “John Smith,” accused of threatening a fellow student with a knife at school. While Newton County Juvenile Court Judge Jenny Carter sat off the bench watching the proceedings, “Judge” Deonte Johnson brought the court to order.

This was no ordinary trial, however. Johnson — along with the defendant, prosecutor, defense attorneys, bailiff and all witnesses — were Georgia State University Newton Campus students in Dr. Tami Wells Thomas’ Criminal Courts class.

The mock courtroom experience was part of their coursework and the Academic  Community Engagement (ACE) program on the Newton Campus.

ACE courses teach students how to leverage classroom knowledge to better understand and address important community issues. In this case, criminal justice students were learning how the juvenile court justice system works firsthand — while creating an instructional video for use by the court system.

For the past few weeks, the students reviewed how the juvenile court delinquency process worked and tried out their separate roles for the mock court trial, said Thomas, a Newton Campus assistant professor of criminal justice — and an attorney herself who was recently appointed part-time magistrate judge for Newton County.

Another of Thomas’ classes (Social Science and American Crime Problems) also is involved in ACE. Students in that class visited Kendra Mayfield, who is the Newton County community resource coordinator for juvenile court. The students are working to research and gather data for alternative sentencing options for juveniles in Newton County and will present their proposals to Mayfield and others in the community who work with juveniles.

“It allows them to take ownership of their studies, and the community engagement piece allows them to be impacted and impactful to the surrounding community,” she  said.

Making sure everything ran smoothly was bailiff Isiah Davila’s job. And as a prosecuting attorney, Yasmine Atkism had the difficult job of cross-examining the witnesses effectively.

“The hardest part was coming up with the opening statement and closing statement,” she reflected.

Portraying a defense attorney was an eye-opening experience for Caden Mason, who is interested in eventually pursuing a degree in law. He joined Peyton Dunham as defense attorneys for the accused.

“The hardest factor was not being able to foresee how the trial would proceed,” Mason said.

For Johnson, playing the judge was more than donning a black robe. She was able to consult with Judge Carter for her ruling. She found the defendant guilty based on the evidence — and sentenced him to two years in juvenile detention.

“I think the hardest aspect (of the trial) was making sure to offer an effective ruling based off the code and statutes,” she said.

“I’m impressed,” Carter said of the students’ work in court. “This is not easy — and sometimes the defendant’s answers are not what you expect. This is what I see day in and day out. It’s good to see the perspective from people who don’t do this for living.”

“This was a good learning experience, and in the future, we can go off this actual experience instead of just the textbook,” Mason said.