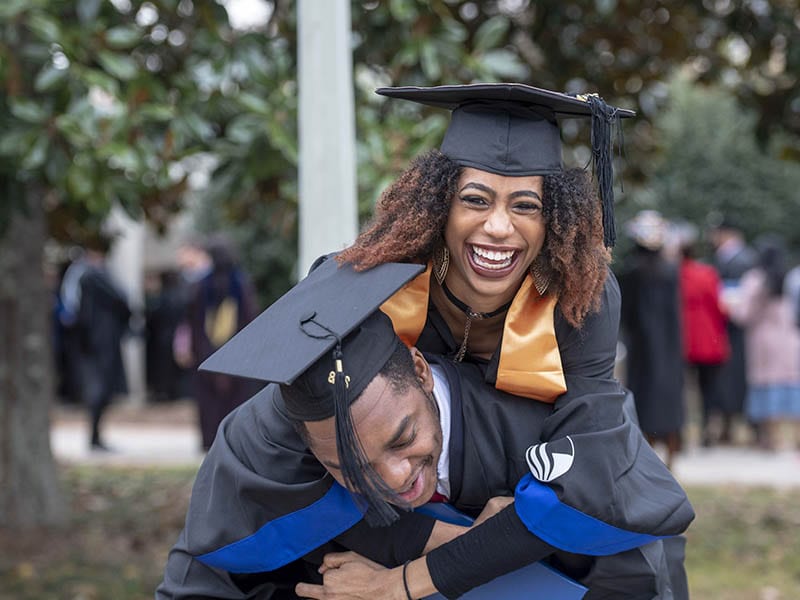 Mitchell’s hard work will pay off Wednesday when he becomes the first in his family to graduate from college.

“I’m feeling accomplished for sure,” Mitchell, a Trinidad native, said. “It’s a big relief to finish.”

There are 994 candidates for graduation from Georgia State’s Perimeter College this December, ranging in age from 18 to older than 65. They are on track to receive associate of arts and associate of science degrees in more than 30 academic pathways, including education, health science professions, engineering, radiologic technology, film and art.

While a Perimeter student, Mitchell, 22, participated in the State Farm Scholars program and the Panther Activities Council and took advantage of support services, such as TRIO,  for students who are the first in their families to attend college.

Born and raised in Ethiopia, 35-year-old Tesfaye Wondimu also will be among this fall’s graduates, receiving an associate degree after following the computer science pathway. After  moving to the United States, Wondimu was disappointed to learn that the computer science degree he’d earned back home was not valid in the United States. He found Perimeter College to be a good place to start over.

“There were challenging times,” the husband and father said about having to reboot. “But I’m so happy that I’m finishing this level and going to the next level in life.”

Perimeter College will continue its graduation tradition of inviting alumni to deliver the commencement address. This year’s speaker is Natasha Solomon, who earned an associate degree in 2017 after studying kinesiology at Perimeter. This May, she graduated with a bachelor’s degree in exercise science from Georgia State’s Atlanta Campus.

Solomon has a strong passion for leadership and wellness and is preparing to apply for enrollment in a program to become a physician assistant.

Her community involvement includes experience as a yoga instructor at the Kashi Center in Decatur, Ga., where she emphasized health and wellness principles to incarcerated women participating in the Kashi Jail Yoga program.

Solomon’s volunteer activities also include collaborating with a team of medical providers to offer free EMT services to patients with no insurance, feeding homeless people in metro Atlanta and coordinating fundraiser events to assist in medical care for homeless animals.