Experts from around the globe gathered at the College of Law on Dec.10 for the annual meeting of the Academy of Food Law & Policy (AFLP). The Center for Law, Health & Society hosted the event, where scholars discussed pressing issues ranging from reducing obesity to the future of beef.

“The need to take a systems approach to food policy—to weigh the various nutritional, environmental, cultural, and political implications of what we eat and how we produce it—was a recurring theme throughout the conference,” said Timothy D. Lytton, professor at Georgia State College of Law and author of “Outbreak: Foodborne Illness and the Struggle for Food Safety.”

Food policy experts gathered for a full day of events, including scholarly reviews and plenaries.

The tradeoffs of meat and meat alternatives as a part of the human diet were the topic of the lunchtime plenary, “The Future of Meat.” Methane emissions from livestock make up an estimated 14 percent of US agriculture’s greenhouse gas emissions, according to the Environmental Protection Agency. It may seem like a small number, but it’s enough for researchers to measure the ethical and environmental costs of meat. Emerging biotechnology has made it possible for scientists to produce lab-grown meat without animals, and some see this as a solution to the environmental problems caused by today’s large-scale industrial cattle farming. However, skeptics argue that meat alternatives require plastics of fossil fuels that are just as harmful to the environment.

Steph Tai, professor at the University of Wisconsin – Madison Law School, moderated the “Future of Meat” discussion. Panelists included Ermias Kebreab, associate dean of global engagement at University of California, Davis College of Agriculture and Environmental Sciences; Margaret Sova McCabe, dean of the University of Arkansas School of Law; and Gilonne d’Origny, translational advisor for the University of Washington Institute for Protein Design.

Tai began by providing a framework for the market implications of changes in consumer attitudes about meat. The meat industry has backed changes to state laws, which propose that the term meat (and associated terms such as burger or steak) can only be used in descriptions of livestock-based products, but not in alternatives. The argument for these changes is that by using the word meat to describe meat alternatives, consumers become confused and think that the alternatives have the same nutritional value as livestock-based products. Tai argued that competition, not confusion, was the real motivation.

“The rise of this kind of legislation is happening because there are producers who are trying to not only reach vegetarian communities, but also communities that are primarily omnivorous,” said Tai. “There is more competition because the stuff tastes similar. The argument for consumer confusion doesn’t hold up because people are buying these products because it’s not meat.” 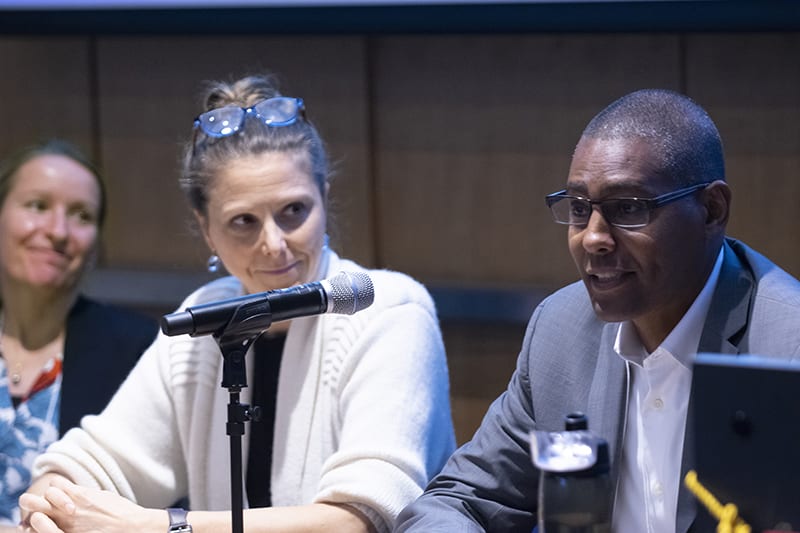 The lunchtime panelists discussed food scarcity, nutrition and the pros and cons of meat alternatives.

From there, the panelists each offered their perspectives. Sova McCabe addressed a number of issues, including the politicization of belief in scientific research, and the potential impact of regulation, such as taxing meat products, on communities that rely on agriculture for income.

Kebreab added to the discussion a consideration of the reasons why people consume meat. He spoke of his home country of Eritrea where, like many developing countries, meat is a vital source of nutrition. He said that children face stunted growth and development that impacts them for the rest of their lives without the zinc, protein and calcium provided by animal products.

For d’Origny, who is working to farm cells to create protein-based meat substitutes, “the mode of production is reflective of the consciousness of the society.” She pointed out that this technology is already at work in cosmetic companies and in medicine. 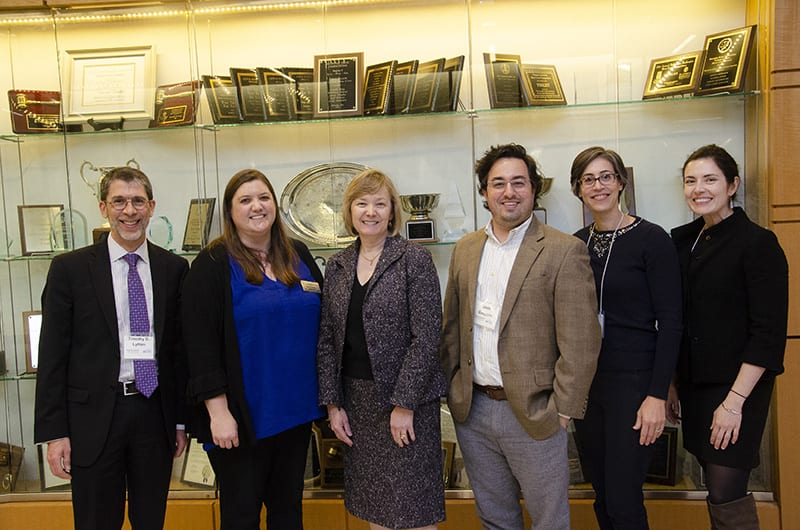 Organizers of the second annual Academy of Food Law and Policy meeting at Georgia State Law.

“Food policy is a balancing act,” said Lytton. “For example, meat provides essential macronutrients necessary for human development, but meat production is a growing source of harmful greenhouse gasses. Discouraging cattle ranching in favor of farming can pose a mortal threat to traditional cultures and the economic welfare of vulnerable populations. Input from scholars is critical to identifying and evaluating these tradeoffs.”

The conference closed with a screening and discussion of the documentary “Bugs,” which is about the potential for the mass production of insect-based foods.

The mission of the Academy of Food Law & Policy is to stimulate intellectual discourse, encourage and recognize scholarship, enhance teaching, support student interest and promote the academic field of food law and policy. Joanna Sax, who served on the AFLP conference organizing committee and is a professor at California Western School of Law, said that conference provides value because it allows experts to learn from each other’s research and take a less myopic view on their own research. The first annual conference was held in 2018 at Harvard University.