David A. Martin, Warner-Booker Distinguished Professor of International Law Emeritus at the University of Virginia School of Law, delivered the 64th annual Henry J. Miller Distinguished Lecture in the College of Law on Thursday, Nov. 21 at 5:30 p.m. in the ceremonial courtroom.

A committee of faculty, led by Georgia State Law professor Paul Lombardo, select the speaker based on significant areas of interest in the legal profession. Martin’s area of expertise is of particular interest to the College of Law, which is opening an Immigration Clinic in January.

“We wanted professor Martin as this year’s Miller lecturer because he is known internationally as a premier scholar of the law of immigration,” said Lombardo, who is the Regents’ Professor Bobby Lee Cook Professor of Law at Georgia State. “He can shed light on the seemingly intractable and always challenging questions raised by the migration of people across national borders, at a time in our country’s history when those questions are the focus of both heated policy debate and public activism.”

Martin joined the Virginia law faculty in 1980, after working in Washington, D.C. as special assistant to the assistant secretary in the State Department’s Human Rights Bureau. He also served as principal deputy general counsel of the Department of Homeland Security from Jan. 2009 to Dec. 2010, and as general counsel to the Immigration and Naturalization Service from 1995-98. He is a graduate of Yale Law School, where he was editor-in-chief of the Yale Law Journal. 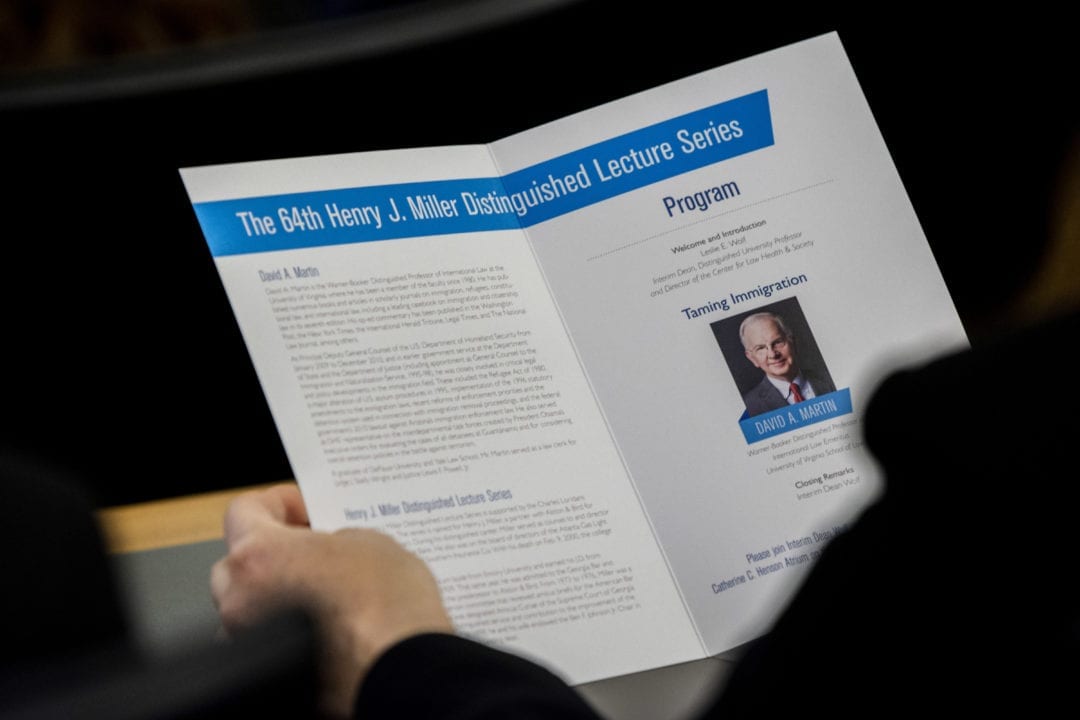 Martin’s lecture was titled “Taming Immigration,” discussing the history of immigration to the U.S., reflecting on present-day issues and obstacles and offering suggestions for a path forward.

He started with an overview of current migration issues and failed attempts to tame migration by focusing on Syrian refugees migrating to Greece and Germany as well as Central Americans coming to the United States. He said that backlash against this unwieldy migration has led to staunch nationalism that threatens the future of democracy in the western world.  He noted that most Americans have a welcoming impulse, but also feel a need for reasonable control. Policy must achieve a better balance.

His proposal for a solution to the crisis in the U.S. includes: a one-time legalization of those long present who do not have a record of violent crimes; resolute enforcement against new violators; consequences for visa over-stayers; and asylum reform . Martin believes that fully staffing the immigration courts must play a critical role in this process.

“Legalization frees up the courts and border enforcement to do their jobs more efficiently,” he said. “We need fully-funded immigration courts, because there are 1.1 million backlogged cases. Budget cuts and long delays undercut all other areas of the immigration enforcement agenda.”

Martin concluded that allowing more refugees and asylum seekers access to lawyers and freeing up the courts has the potential to lead to lead to less polarization surrounding immigration.

The Henry J. Miller Distinguished Lecture Series is supported by the Charles Loridans Foundation Inc. and named for the late Henry J. Miller, a partner in the law firm of Alston & Bird for more than 50 years. The lecture is held in the fall and in the spring each year.