Sierra Lawrence grew up watching crime shows, namely “Law & Order SVU,” and playing sports. The Snellville, Ga. native developed a reputation as a formidable basketball and softball player, and went on to play softball at the University of Michigan. She thought she would become a physical therapist, but the early science “weed out” classes opened her up to other possibilities.

After taking undergraduate Race and the Law and Criminal Law classes at Michigan, she discovered a passion for advocacy. Lawrence found a mentor in family friend Max Richardson, who has been a criminal defense attorney in metro Atlanta for several years. He encouraged her to attend Georgia State Law and the rest is history.

“Georgia State Law offered me a relaxed, community environment where I could find classmates and friends,” Lawrence said. “Plus, it’s the best value out of all the schools in Georgia.”

Lawrence came in knowing that she wanted to litigate, and she gets plenty of practice as president of the Student Trial Lawyers Association (STLA). She is responsible for helping to coordinate team members for competitions and making sure that everyone remembers to have fun. She also helps plan the Opening and Closing Argument Competition as well as the Advocacy Series. In addition to STLA, she is involved with the Criminal Law Society and Black Law Students Association. 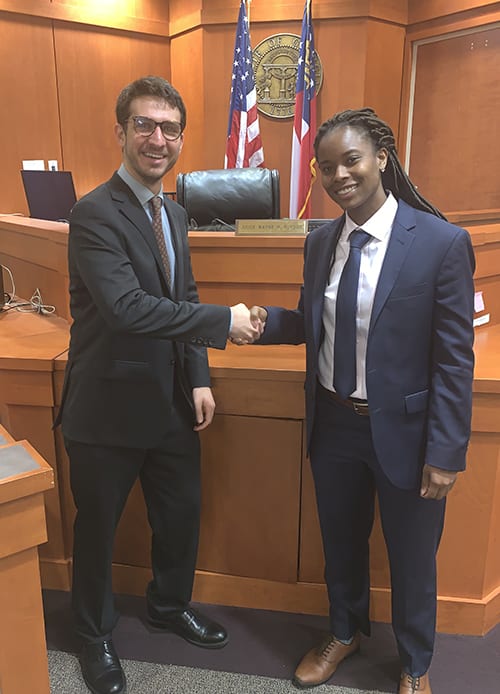 Sierra Lawrence (right) and a classmate at a Mock Trial competition

She’s currently taking a Fundamentals of Law class where student represent domestic violence victims who are seeking temporary protective orders (TPO) through Cobb County Legal Aid. In the class, students meet clients, interview witnesses, write briefs and prepare to present a case to the court. The class has been the perfect complement to her mock trial experience.

“In Mock Trial, you’re graded on a point system, but in real cases you’re graded on the law and how you apply it,” Lawrence said. “We only had three business days to prepare for the hearing, and we ultimately didn’t have a hearing, but the client was granted a TPO. What was important at the end of the day is that my client got their TPO.”

After graduation, Lawrence wants to work criminal defense or in the JAG Corps. This summer, she interned at Army JAG court in Hawaii for eight weeks where she rotated through various areas of military law, observed someone taking a polygraph test, sat in on a trial– and surfed in Maui. Though she mostly observed prosecutorial proceedings, she is still interested in helping people who might not be easy to defend.

“Everyone deserves to be represented fairly without judgement,” Lawrence said. “That’s what our criminal justice system in America is about. Everyone deserves a fair trial and someone has to do it. Plus, I like a challenge.”