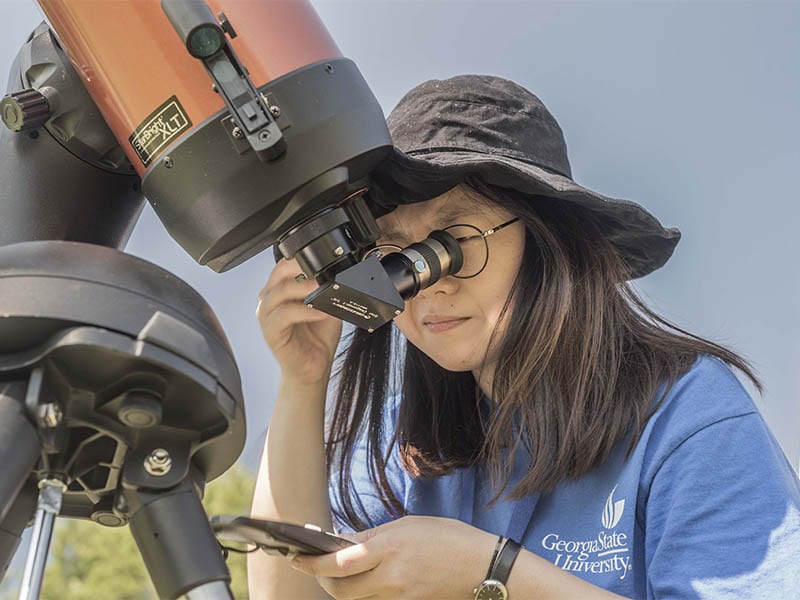 DECATUR, Ga.—Georgia State University’s Perimeter College is hosting three Transit of Mercury viewing events on Monday, Nov. 11, and the public is invited to participate in the infrequent astronomical occurrence.

During a transit of Mercury across the Sun, the planet Mercury passes directly between the Sun and Earth becoming visible against the solar disk. The Mercury phenomenon won’t occur again until 2032.

“This is an every-once-in-a-while type of event,” said Susannah Lomant, Perimeter College assistant professor of physics and astronomy, who coordinated a well-attended, community watch party for the solar eclipse two years ago on the university’s Decatur Campus. “The next time you see this — if you see it — you’ll be in a different phase of your life, so see it now, while you can.”

According to the Jet Propulsion Laboratory webpage at nasa.gov: “With the proper safety equipment, viewers nearly everywhere on Earth will be able to see a tiny dark spot moving slowly across the disk of the Sun.”

“I thought it would be cool if we could get people involved,” said Lomant.

“We’ll be out there if the sky is clear or partly cloudy, but not if it’s overcast,” he said.

Perimeter College faculty and staff will host the Transit of Mercury observations, with the use of filter-protected telescopes, on Monday, Nov. 11, at the following times and Georgia State locations: