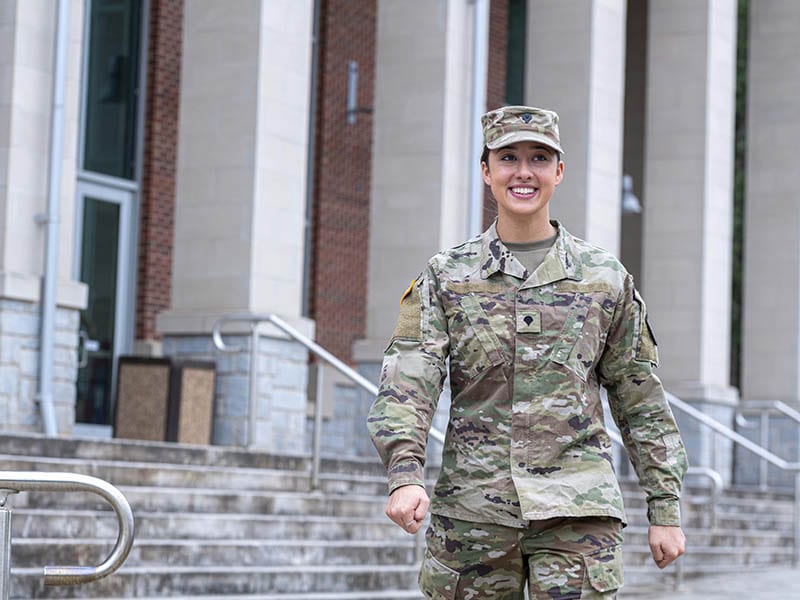 At 17, Devon Phelps joined the Marine Corps right out of high school in Chicago.

“At the time, going to college wasn’t an option,” he said.

Phelps knew he wanted to attend college someday and thought the G.I. Bill might help finance his educational dreams. He signed up and served for nine years, which included a deployment to Africa. He’s now an engineering student on Georgia State’s Alpharetta Campus.

Lina Cox joined the Junior Reserves Officers’ Training Corps while a freshman at Loganville High School in Walton County. When she was 17 and out of high school, she joined the Georgia Army National Guard.

Though none of her family had served, “I always thought I wanted to be in the military,” she said. After serving, Cox decided to use the G.I. Bill to go to college and study criminal justice. Her plans changed, however, and she now has her eye on pediatric nursing.

“I love kids, and the military did help me figure that out — I had a big change of heart,” she said.

Cox remains an active member of the Guard’s Military Police — while studying pre-nursing on the Georgia State’s Newton Campus.

To acknowledge the commitment and service of student veterans such as Phelps and Cox, Georgia State University’s Perimeter College has planned a special Veterans Recognition Ceremony for Wednesday, Nov. 6. The event begins at 11 a.m. at Georgia State’s Clarkston Campus.

Though Phelps, now 27, and Cox, 20, have not met, and each chose Georgia State University’s Perimeter College for their individual academic goals, they are among more than 3,000 active military students and veterans served by Georgia State’s Military Outreach centers (MOCs.)

The Military Outreach efforts helped earn Georgia State the No. 1 Military Friendly Ranking Tier 1 Research Institute for the 2019-20 by Viqtory Media, “which measures an organization’s commitment, effort and success.”

“Having a dedicated space and person for our student veterans to turn to for assistance has always been the key to Georgia State achieving its high Military Friendly® rankings,” said Mark Eister, Georgia State’s Military Outreach director.

Phelps spent nine years in the 2nd Marine Aircraft Wing, stationed in North Carolina as an aviation hydraulics mechanic and as a quality assurance inspector, testing aircraft for defects and metal fatigue.

During his service he deployed to Africa as part of the 22nd Marine Expeditionary Unit with Operation Odyssey Lightning, supporting Libyan nationals against the Islamic State. He left the Marine Corps in 2018 at the rank of sergeant.

Cox’s latest deployment with the Guard’s Military Police was in July to the country of Georgia, where she trained for six weeks in the desert with military police units from around the world.

Her unit, the 178th Military Police unit out of Monroe, Ga., also helped with Hurricane Michael cleanup in Albany, Ga.

Cox said she chose Perimeter College for its affordability, the intimacy of its campuses and the college’s military outreach programs.

“You can see the reviews — it has the best helpful military outreach programs, she said. “And I love the Perimeter campuses — the classes are small, and everyone is friendly.”

Both Cox and Phelps have used the military outreach centers.

For Phelps, who is studying engineering on the Alpharetta Campus, having a military student advocate familiar with veteran issues has meant a lot when it comes to helping with VA paperwork.

“Susan Soper (the MSA on Alpharetta campus) was a help to me,” Phelps said. “She always gives me a call every couple of weeks to ask how I’m doing.”

Phelps received an associate degree at Coastal Carolina Community College in Jacksonville, N.C., while in the Marines. He came to Perimeter College because of its reputation as a strong preparatory program for engineering students seeking to transfer to top engineering programs like Georgia Tech, he said. At Perimeter, he’s enrolled in calculus, linear algebra, statics and physics and has maintained a 3.7 GPA. The father of two has been accepted to Georgia Tech. and plans to transfer there after graduating from Perimeter. He wants to study material science engineering.

Cox is studying pre-nursing on the Newton Campus and has a 3.6 GPA. She’s been active  in the Student Veterans Association, for which she served as president in 2018.

During deployments with the National Guard, she worked with her Military Student Advocate (MSA), John Cockingham, as well as with Eister,  to help with class absences. Juggling deployments and college work can be a challenge, but the MSA helps, she said.

“They’re a big help in working with my professors and letting them know about my service,” she said.

The Veterans Recognition Ceremony will be Wednesday, Nov. 6, at 11 a.m. on the Clarkston Campus in front of the CA building (CN building if rain.) The featured speaker will be Georgia State Rep. Dave Belton, a retired major and naval aviator and Georgia State House chairman of Military Affairs. The event is open to the public. For information or to RSVP, contact Betsy Hardy at vhardy3@gsu.edu