Several Georgia State Law professors participated in the LatCrit Biennial Conference, held Oct. 17-19 in the College of Law. The theme of this year’s conference was “The Dispossessed Majority: Resisting the Second Redemption in América Posfascista (Postfascist America).”

The conference is put on by Latina & Latino Critical Legal Theory, an organization of legal and critical race studies scholars.

“LatCrit is concerned with how law codes relations of dominance in the U.S. and globally, with a focus on race, gender, class and sexual orientation, and how law can be used as a tool to eliminate disparity,” said Sekhon. 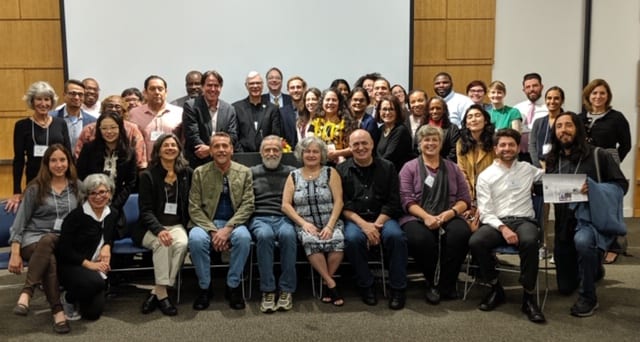 LatCrit attendees at a dinner honoring Frank Valdez, a professor at the University of Miami School of Law, whose research includes Latina/o legal studies and critical outsider jurisprudence.

Addressing disparity was the topic of keynote speaker Chokwe Antar Lumumba’s speech. Lumumba is the mayor of Jackson, Miss. and has been called one of the most radical mayors in America. He spoke about steps his administration has taken to bring self-determination to governance by creating people’s assemblies where residents get to weigh in on everything from the budget to bringing a movie theater downtown. He issued a challenge to the attorneys to think about how they can challenge what he called the “unjust labor economy.”

On Oct. 18, Torstveit Ngara and Middleton continued the conversation on a panel entitled “Immigration “Public Charge” Rules and the Ripple Effect on U.S. Citizen Household Members.” They were joined by Michelle Ewert who directs the Civil Clinic at Washburn Law and Ravi Rajendra, deputy county counsel for Santa Clara County. The Trump administration announced earlier this year that a person can be denied citizenship if they receive assistance from social security, EBT, WIC or any number of public programs. The panelists discussed the history of the public charge rule and the status of current litigation on the rule.

In addition to scholarly discussion about how marginalized communities are impacted by the law, LatCrit is concerned with diversity in academia. More than 70 percent of professors are white, according to the National Center for Education Statistics. Sekhon says that what makes LatCrit special is that it “helps to create a sense of place for people who may find themselves the only person who looks like them in a room.”