Workshop aims to answer critical questions about the Constitution

When foreign dignitaries meet with President Trump and stay in the Trump Hotel, is that a violation of the U.S. Constitution’s emoluments clause? That is a hard question to answer because the word “emolument” has almost vanished from modern English. For Georgia State Law professor Clark Cunningham, corpus linguistics, a method that uses computer analysis to study large data sets of historic texts, can help answer this question.

On Friday, Oct. 18, Cunningham hosted scholars from around the country for a Law & Linguistics Workshop at the College of Law. The workshop was designed for lawyers and linguists to collaborate on editing papers that will be published in a special edition of the Georgia State Law Review, using the resources of corpus linguistics to interpret statutes and provisions in the U.S. Constitution. The majority of the papers were written by recent graduates of the College of Law and Georgia State Department of Applied Linguistics as well as current Ph.D. students in linguistics. Leading scholars from law and linguistics joined them as co-authors, or offered feedback on papers. Topics ranged from the meaning of emolument to the reach of executive power to the difference between the agency of “people” versus “citizens” in the U.S. Constitution. 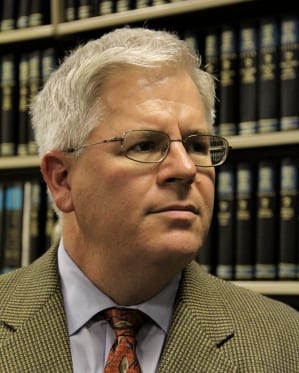 Cunningham became interested in interpreting old texts while he was an undergraduate studying medieval literature at Dartmouth College. The first text he attempted to analyze using linguistics was “Beowulf,” the oldest poem in the English language. During law school, his attention turned toward a linguistic analysis of the meaning of “search” in the 4th Amendment. When he became a law professor, the application of linguistics to law became a major focus of his research and writing.

“What fascinated me when I was first exposed to linguistics is the possibility that the study of language could reveal new information about how we think,” said Cunningham.

At the workshop, this was especially apparent in a session titled ““We the Citizens?”: A Corpus Linguistic Inquiry into the Use of “People” and “Citizens” in the Founding Era.” Diana Coetzee, an English professor at Brenau University and Abigail Stout (J.D. ’19) posed the question, “During the founding era, how were the words people and citizens used differently as it relates to agency?” For example, was the right to elect government officials described as being in the hands of “citizens” or “the people?” Georgia State Law professor Bill Edmundson offered a response, saying that they need to consider whether citizens and people might have been used interchangeably in the U.S. Constitution. This type of feedback will help them as they prepare for publication.

Cunningham believes that obtaining a deeper understanding of the Constitution’s language can serve to vindicate the work of the founders in giving ultimate power to the people.

“When we pay close attention to the original meaning of the words in the Constitution,” said Cunningham, “we are making ourselves heirs to the pledge made by the founders in the first sentence of the Constitution: “We the People of the United States…secure the Blessings of Liberty to ourselves and our Posterity.”

A full list of the papers presented at the workshop and their authors is below:

“Revisiting a classic problem in statutory interpretation: Is a minister a laborer?”

““Questions Involving National Peace and Harmony,” or “Injured Plaintiff Litigation?” The Original Meaning of “Cases” in Article III of the Constitution.”

“Effective But Limited: A Corpus Linguistic Analysis of the Original Public Meaning of Executive Power”

““We the Citizens?”: A Corpus Linguistic Inquiry into the Use of “People” and “Citizens” in the Founding Era”