ATLANTA—A team of Georgia State University geoscience researchers has begun a three-year study of the South River watershed in metro Atlanta’s DeKalb County to determine how infrastructure and the natural environment interact in urban watersheds.

With 80 percent of the U.S. population living in urban areas and water use for municipalities tripling since 1950, the combination of rapid development, aging infrastructure and vulnerable river systems creates a critical challenge for the future.

The researchers say their focus on the South River watershed will offer lessons that will apply to many urban environments and cities across the United States. The work is being supported by a three-year, $400,000 grant from the National Science Foundation.

“We hope our approach will offer lessons on how we learn about critical water issues especially in the context of cities growing rapidly,” said Ellis Adams, an assistant professor of global studies and geosciences at Georgia State.

“This is critical for planning. It’s not just a study and what we learn but being able to quantify all of it is important for someone working with wastewater treatment plants or someone planning for the future of a city and where its water is coming from.”

The researchers coined the term “infrastructure-mediated flows” to lump together the various ways in which piped flows of drinking water and wastewater intermix with flows of water in the natural environment such as in stream and river channels. That includes a pervasive problem across American cities called infiltration and inflow, which is when rainwater percolates into the ground and finds its way into sanitary sewer pipes through poorly sealed manholes or breaks and leaks in and out of aging pipes, putting an extra burden on wastewater treatment plants.

“We’re trying to capture qualitative knowledge from local experts about what are all the ways water flows in and out of the basin and then trying to put numbers on them,” said Luke Pangle, a Georgia State hydrologist who leads the interdisciplinary faculty team that includes Adams, Richard Milligan (human environment geography) and Jeremy Diem (climatology). 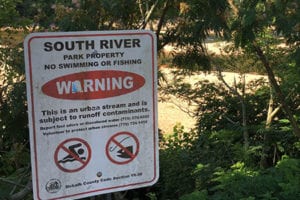 “How much water that passes through wastewater plants is clean rainwater that didn’t need to be there at all?” Pangle said. “That number is not known and something we hope will be generated by this project and lead to some impacts. Then we’ll be able to say what degree those pipe flows are altering the hydrology of the watershed and vice versa.”

The researchers say DeKalb County is an ideal community to analyze complex urban hydrology. The fourth most populated county in Georgia sits astride the eastern sub-continental divide, with about half of the county sitting in the Chattahoochee watershed that flows to the Gulf of Mexico and the other half in the South River basin that flows toward the Atlantic Ocean.

DeKalb gets all of its drinking water from the Chattahoochee, yet more than 30 million gallons a day drain into the South River, representing the largest interbasin transfer of water in the Apalachicola-Chattahoochee-Flint River Basin, according to the Georgia Environmental Protection Division.

“Knowledge from this study could help the EPA and DeKalb County to prevent untreated sewage from entering the South River and its tributary creeks,” said Milligan, who specializes in environmental justice research.