Georgia State Law students, faculty and alumni gathered last night for a celebration of The Order of the Coif and The Order of Barristers. The two prestigious honor societies inducted 27 students and two honorary alumni.

The Order of the Coif dates back to medieval England and derives its name from the headdresses worn by serjeants at law during that time. Of the 237 law schools in the U.S., only 81 have chapters. At Georgia State Law, The Order of the Coif recognizes students who are in the top 10 percent of their class as well as attorneys and judges who have practiced with distinction.

“There are few if any honors that burnish a recent law graduate’s resume more than Coif membership,” said faculty advisor Nirej Sekhon. “Being inducted into the Order signifies that you are among the highest achieving law graduates in the country.”

This year’s honorary inductee is Robert N. Spencer (J.D. ’85), who is the president of West Coast Tomato in Bradenton, Fla. Spencer and his wife Mary Anne met at the College of Law, and she continues to practice law at Schofield and Spencer, P.A. in Bradenton. The couple have continued involvement with the College of Law, and have named a classroom on the first floor.

“Today is the first time I’ve been on campus since the new law school was opened,” said Spencer. “It’s amazing to see how far this school has come. I’m very proud to accept this award behalf of the class of 1985 that I was privileged to be a part of. I feel so thankful for the opportunity to go here and be a part of a beginning.” 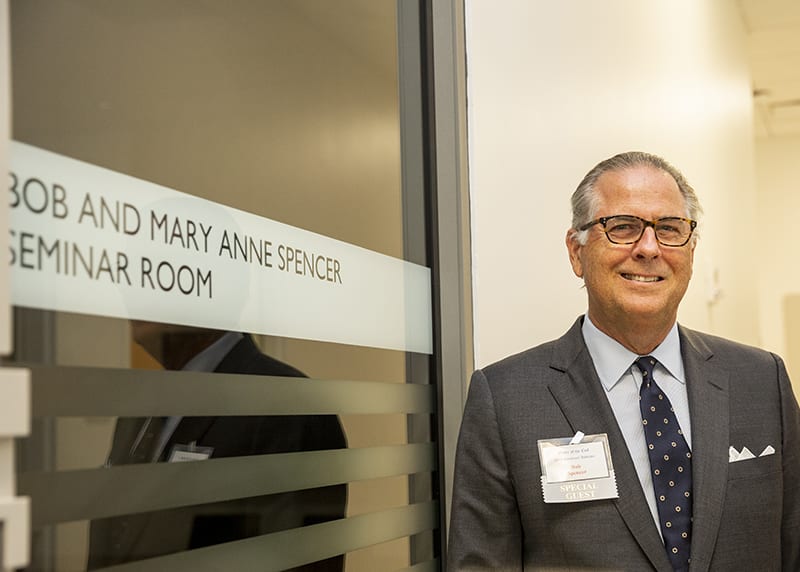 GSU Law graduate Bob Spencer saw the classroom he and his wife named for the first time.

The Order of Barristers was founded at the University of Texas at Austin Law School in 1965 to honor students who have exemplary advocacy experience. When Professor Corneill Stephens was appointed director of the GSU Law advocacy program last year, he had two goals: Form a chapter of the Order of Barristers and create a certificate in advocacy. He’s done both in a year’s time. The inaugural class was inducted last year, which included four members of the mock trial team and four from Moot Court.

“Our Moot Court and Mock Trial programs have been nationally recognized as some of the best in the country,” said Stephens. “So, it’s only natural that we have a chapter that recognizes the exceptional students that we have in our law school. We were able to expedite the process to establish a chapter because of our reputation.”

The organization also recognizes practicing attorneys who have dedicated their careers to advocacy. Jimmy R. Faircloth, Jr. (J.D. ’89) is this year’s honorary inductee. The Pineville, La. native is the founder and managing partner of Faircloth Melton Sobel & Bash, with offices in Baton Rouge and Alexandria. Faircloth has worked as a trial attorney for 30 years and was executive counsel for former governor Bobby Jindal. He represented the state of Louisiana after the 2010 Deepwater Horizon oil spill.

While in school at Georgia State Law, Faircloth participated in Moot Court and won a number of regional and national advocacy competitions. During his acceptance speech, encouraged students to have unyielding enthusiasm.

“When my partners and I are interviewing recent graduates for positions, we look for three things: talent, work ethic and enthusiasm,” he said. “There’s something about the associate who gets excited about a mundane research project. Enthusiasm is the intangible.” 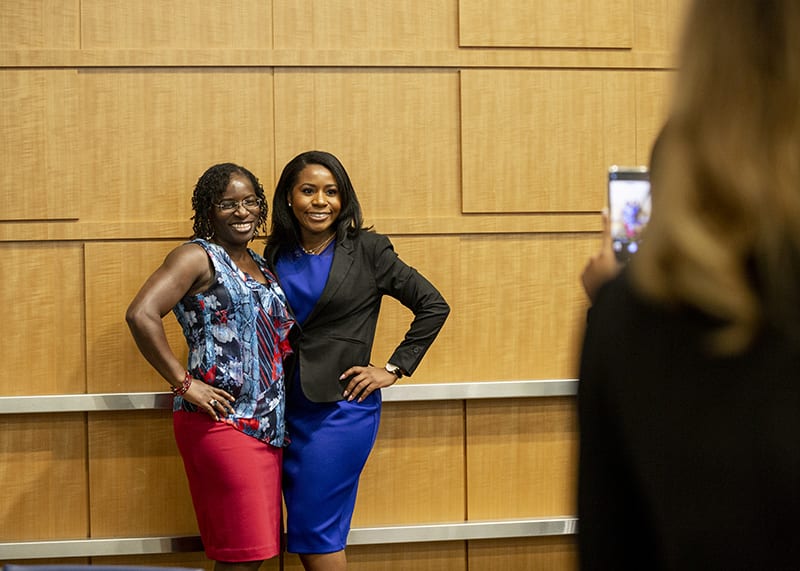 Sharnell Simon (on left) celebrates her Order of the Coif induction.

Order of the Coif