When most students go to law school, they’re usually expecting something like what they’ve seen on television—a mashup between “Law & Order” and “Matlock.” But, around orientation they start to realize that there is a lot involved before setting foot in a courtroom. Associate Dean of Students Alexis Martinez helps to ease the transition.

Martinez went to law school at the University of Miami, and after sitting in classes and listening to her peers talk about their ambitions, she realized that she didn’t want to use her law degree in the same way. So, she sought counsel from the dean of students, and found that she was more passionate about supporting law students than she was about practicing law.

For the last 15 years, Martinez has dedicated herself to student success, and joined the College of Law in August 2018. Since arriving at Georgia State, she has created a leadership transition plan for student organizations, built a mentorship program, streamlined the advisement process and re-imagined new student orientation. We caught up with her between meetings to find out how her law degree informs what she’s doing now.

What was your favorite class in law school?

My first year it was Constitutional Law. I’m a history buff and my professor always put it into perspective about what was going on at the time. My other favorite class was International Law. 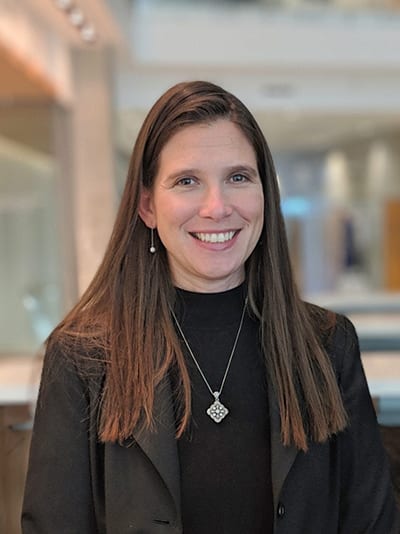 Tell me about how you decided to go into higher education instead of law practice?

One summer, I ended up working with a solo practitioner who helped to broker yacht sales and register them in foreign countries, which was a lot of contract law. As cool as it was, I couldn’t imagine doing that on a daily basis. So, I went to the dean of students, and she asked me, “What’s your dream job?” I looked at her square in the face and I said, “Your job.” She said, “Okay, let’s make it happen.” It wasn’t the answer I expected, but it was exactly what I needed.

As a young administrator, how did you build rapport with students, especially in that first job?

Most students come to law school because they either want to make a change in society, whatever that means for them, or they believe in the legal structure. One of those two things is usually at the base of why they come to law school. If you create for them the opportunity to make positive changes, or the chance to reinforce a fair system, they usually respond well and are appreciative. Those are things that help to build trust for future conversations.

What makes Georgia State Law different than other law schools?

The students are so hardworking and have this great camaraderie among themselves. The faculty connect and work with students. In every single conversation when I first came here, that came across so vividly. It’s also a law school that supports me doing new and different things. I’d looked at working at other schools that wanted a dean of students to either continue what had been done before, or maintain the status quo. The message I got here is that we want to do more and better, for and by, students. That’s exciting to me and that makes Georgia State stand out.

What’s your favorite part of your job?

When students come into my office with ideas, challenges or whatever it might be, I love having that conversation and empowering them to address what’s going on. I also love celebrating student successes. Whether it’s recognizing them at Honors Day, or starting the year at orientation where we had 20 upperclassmen students that volunteered their time and energy to ensure that the next group of students have the same or a better experience than they did, that’s one of my favorite things.

How does your law degree inform what you’re doing now?

As an administrator, I look at a lot of rules and policies, and law school taught me how to look at those things in a much more critical way. I learned in law school to listen more, and that advocating is about learning and knowing when to use your voice. That’s definitely something I use on a regular basis. I truly do believe that the law is a universal degree that does amazing things for people and opens doors in a way that no other degree can do.