Georgia State esports champion Praful Gade, an Honors psychology and neuroscience major, plans to research what goes on inside the minds of video gamers.

Praful Gade has been a gamer for most of his life. At age 13, he started playing “Smite,” a game that pits mythological gods, goddesses and lowly minions against each other in team or solo battle.

Today, he’s a two-year veteran of Georgia State’s varsity “Smite” esports team. After winning six Georgia Esports League state championships and finishing fourth in the nation at the National Association of Collegiate Esports Spring Gem Cup, Gade and his team recently won two national championships as well. They took home the top prizes at Dreamhack Atlanta on Nov. 17 and at the American Video Game League’s Collegiate Championship on Dec. 5 — quite a feat for a program that was just established in 2017. 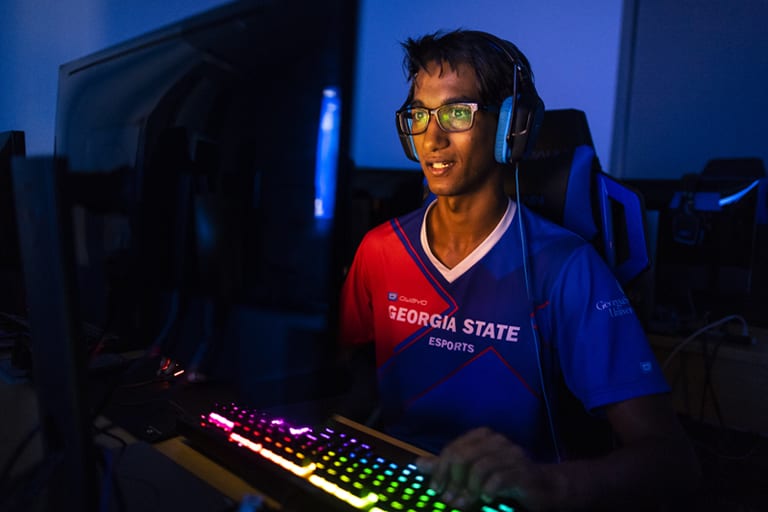 “When this season began, our ‘Smite’ team wasn’t getting the recognition it deserved,” said Gade. “We knew we were good, but it felt like nobody wanted to acknowledge it. Winning these two national championships allowed us to dispel any doubts people had about us.”

The Honors College student is also pursuing a double major in psychology and neuroscience. When he’s not inflicting damage to opponents inside the “Smite” battle arena, he’s in the psychology lab exploring how virtual reality and other emerging technologies can treat anxiety.

Gade’s course of study and his favorite activity have led him to an interesting, and personal, thesis: He wants to investigate the long-term neurological and behavioral effects of playing video games.

“I want to do more research on people who spend their time with technology, especially gamers and those who are always on computers and social media,” he said.

And he considers himself a test case. When he’s on stage playing for the university, he says he becomes a different person.

“I like to showboat a bit,” he said, laughing. “If fans show up for me, the least thing I can do is make it fun for them.”

His typical reserved, measured demeanor disappears, and he transforms into a performer who likes to trash talk his opponents and get the crowd going by dancing and waving his arms.

“For me, there’s a big difference in how I act when I’m talking to you versus when I’m playing the game,” he said. “I am definitely a lot more fired up in competition.”

Studies show gaming can be beneficial for the brain — even improving cognitive control and hand-eye coordination — but Gade, who plans to pursue a Ph.D., says he wants to investigate the differences in a player’s behavior inside and outside the game.

“I think there’s going to be a lot more research needed in this area in the coming years,” he said.

After his team’s recent championship victories, WSB-TV recently interviewed Gade and his adviser Page Anderson, associate professor of psychology, about the intersection between esports and Gade’s research interests.

Despite his talents in the video game arena, he doesn’t plan to turn them into a professional career.

“A lot of people aspire to turn pro,” he said, “but I’ve always looked at this as a way to help pay for school.”