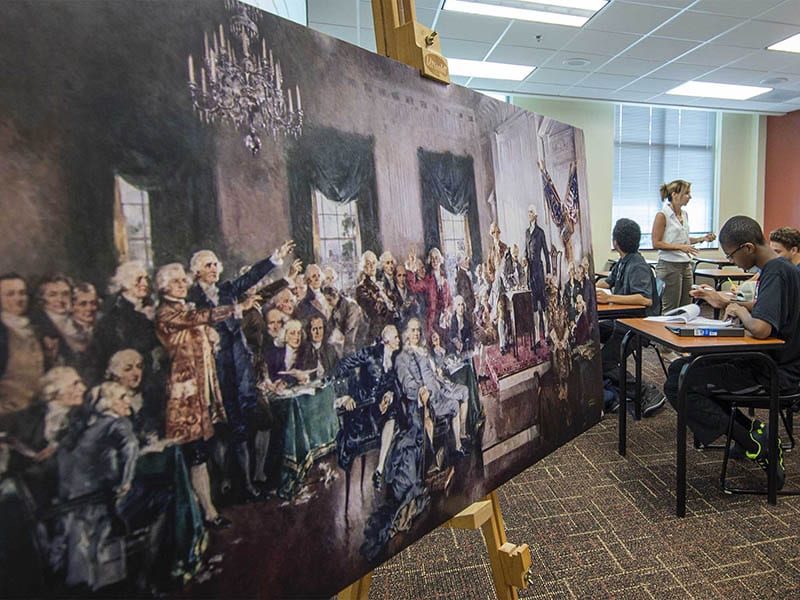 COVINGTON, Ga.—For Barbara Robertson, Sept. 17, 1787, is no dusty date. Because it marks the ratification of the U.S. Constitution in Philadelphia, Pa., the date references a document that affects every American every day.

That’s why months before each September, the Georgia State University Newton Campus political science instructor can be found planning programming to commemorate the historic document.

“So much can be traced back to the Constitution, directly, or indirectly,” said Robertson, who teaches American Government at Georgia State University’s Perimeter College and often sprinkles constitutional trivia questions throughout her lectures.

One of her favorites that often stumps the class? “How many constitutional amendments are there?” (The answer: 27.)

“A lot of people don’t realize how little that is over some 200 years and how hard it is to amend the Constitution,” she said.

It was the U.S. Congress who decided the ratification date should carry an educational component, Robertson said.

Originally called Citizenship Day, the name was changed to Constitution Day in 2004 by Congress, which also required that every educational institution that receives federal funding should have a program commemorating the Constitution every year on or around Sept. 17 to promote civic education.

Robertson, her political science colleagues and student groups across Perimeter College have planned programs to mark this year’s Constitution Day, with speakers, voter registration and other activities celebrating the country’s abiding legal document.

A list of the events is below. All are free and open to the public. For more information, contact Robertson at brobertson@gsu.edu

All activities for the two-day Newton Campus Constitution Day event are in the lobby and auditorium, Building 2N, 239 Cedar Lane in Covington, Ga.