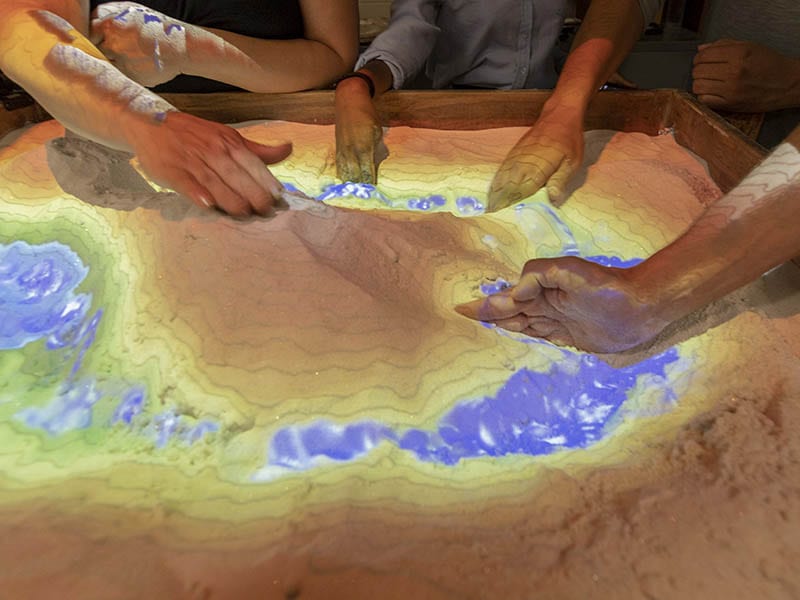 The material the students are moving is “play sand,” but this is no playground sandbox. Alex Ullrich, a Dunwoody Campus geology and environmental science instructor, has built the 3D “augmented reality” sandbox to teach his students about topography, watersheds, soil erosion and other changes to Earth’s landscapes.

“A typical topographic map for students is a two-dimensional piece of paper — that means it’s left to the student to be able to imagine all the elevation features that the map shows — from peaks, valleys and slopes of varying steepness,” Ullrich explained. “This three-dimensional model allows them to grasp concepts in real time and make changes and alterations in the topography so they can really find that ‘aha’ moment for themselves.”

Ullrich was inspired to construct the sandbox after seeing a YouTube demonstration created by researchers from the University of California-Davis Keck Center for the Active Visualization of the Earth Sciences. He built the 7-foot sandbox with wood, fiberglass and PVC pipe and used more than 150 pounds of sand to fill it up. He mounted a projector and an X-Box (gaming box) sensor above the sandbox, which projects images down upon the reflective white sand.

The 3D effect is created by using free, open-source software from UC-Davis. When someone moves the sand to create hills, mountains and valleys, the X-Box motion sensors produce the colored stratified terrain to match it. Simple hand movements above the sand can produce the effect of water in the landscape.

“(When I first) bring out the sandbox, “everyone seems a bit timid to really dive in, but once they do, they have a great time building mountains and oceans, making lakes and watching the water effects projected on the sand,” said Ullrich. “For some, it’s really hard to pull them away. And that goes for faculty, too.”

The instructor, who already has plans for improving his sandbox, recently received a technology grant to build another augmented sandbox model.

“I plan to build a more advanced piece of equipment,” he said.

He’s excited when he thinks about how his students will react to the updated version this fall.

“My favorite part of teaching geology is taking all the concepts that are so far removed from students in class and bringing them to life, through field trips and demonstrations (like the augmented reality sandbox),” Ullrich said. “It’s really fulfilling when I see a student discover that they can learn really exciting things in places they may never have expected.”