As the nation celebrates the 50th anniversary of the Apollo 11 moon landing this month, five Perimeter College students are making some of their own history with NASA.

To compete for a seat with NCAS, students must complete a five-week online research program, which requires them to pass a series of tests and write a research paper on Mars. If selected, they are assigned to one of NASA’s 10 field centers across the country for an opportunity to meet engineers, tour facilities and collaborate on team projects.

After establishing fictional companies interested in Mars exploration, each team must develop and test a prototype rover, manage a budget, develop communications and outreach, and more.

“When we got here, we were all assigned mentors, and they were with us a few hours during the day as we worked on the coding for the Mars rover project,” said Hector Enciso, who is studying engineering. “It was a great feeling that we were actually doing something with these individuals. I kept thinking, ‘This is NASA.’ I never once thought I would be fortunate enough to have this opportunity.”

Muttalib, who is also studying engineering, was in charge of building a rover with another team member at Langley.

“I enjoy building things and was really excited when I saw the task was constructing a miniature Mars rover,” she said. “I also got to know a lot of people I never thought I’d meet, including a woman engineer who is also a lawyer. Now, I know it’s possible to study engineering and also learn about law. I am interested in studying both fields.” 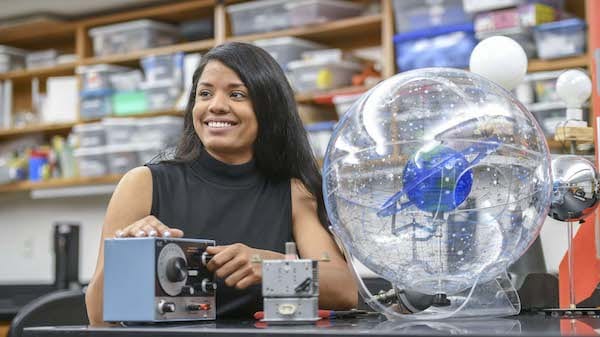 For Johnson, an Honors College student, the trip allowed her to use her interest in software engineering to program the miniature rover to pick up minerals and rocks. As president of the Dunwoody Campus Computer Science Club, Johnson is a proficient coder. She was also a member of the Perimeter College team that placed third in the national Google Hackathon challenge in Detroit this past March.

“The biggest lesson I learned at NASA was how to work well in a diverse team even when we had different opinions,” Johnson said.

NCAS is funded in part by NASA’s Minority University Research and Education Program (MUREP), which focuses on connecting underrepresented and underserved students in the science, technology, engineering and mathematics (STEM) disciplines with practical learning experiences outside the classroom.

“NCAS not only inspires community college students to advance in the STEM fields, but it also opens doors for future careers at NASA,” said Joeletta Patrick, project manager at MUREP. “NCAS has a legacy of alumni moving on to NASA internships and ultimately entering the NASA workforce.”