Ca’Shawn Brown, a rising junior in the Honors College at Georgia State University, spent most of May studying French, sign language and deaf culture in Montpellier and Paris, France.

Brown, who is majoring in applied linguistics, received the Benjamin A. Gilman International Scholarship for the summer semester. The scholarship allows students of limited financial means to study abroad, which Brown said is an integral part of her education.

“The world is so much bigger than the United States,” Brown said. “I want to explore outside of America and gain a better understanding of various cultures, languages and perspectives.” 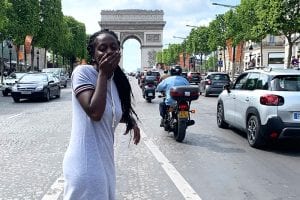 Brown’s adventure began at L’Institut de Francais, where she took intense lessons in French, a language she had never spoken before.

“To learn a language in the place where it’s used the most is some of the most beneficial and educational experiences I’ve ever had,” she said. “I can also say the same for learning Les Signes de Francais (LSF, French sign language). Interacting with the deaf students using LSF helped me learn better than any classroom or book could.”

Brown also was able to attend a film festival for deaf audiences and interact with deaf students, age 4 to 18, and teachers at various schools that are part of a French educational system for the deaf. Brown said she was able to communicate with the deaf students using LSF and found similarities between LSF and American Sign Language (ASL), which the students were eager for her to demonstrate.

“I remember this one interaction with this elementary-level girl wherein we were exchanging signs between LSF and ASL,” Brown said. “She would show me the LSF sign for blanc, and I would show her ASL for white. I usually have my voice off when signing, but the little girl had asked me to please use my voice so she could try to emulate the English pronunciations of the colors.

“I became popular among the students, and it’s nice to say I have friends on the other side of the world,” she said.

During her time abroad, Brown became proficient enough to read a book in French and was inspired to continue learning the language.

The Gilman Program is sponsored by the U.S. Department of State’s Bureau of Education and Cultural Affairs and is supported by the Institute of International Education.

The Office of National Scholarships and Fellowships in the Honors College advises honors and non-honors students on their applications for competitive national awards, including Gilman. For more information or to set up an appointment, contact Jacob English at (404) 413-5577 or make an appointment online.