Kirk Gibson (M.S.W. ’18) has hit his stride working for the Giving Kitchen — the nonprofit that got him back on his feet.

Kirk Gibson’s plans for Spring Break 2017 were pretty unconventional. Instead of lazing about on the beach with friends, he’d attempt to conquer a high-intensity Ninja Warrior training course. But a debilitating injury to his foot and ankle quickly derailed that mission.

Many people in Gibson’s position could return to work, grinning and bearing it on crutches, a boot or a scooter. But Gibson was working as a restaurant server to pay his way through graduate school and needed to be on his feet. 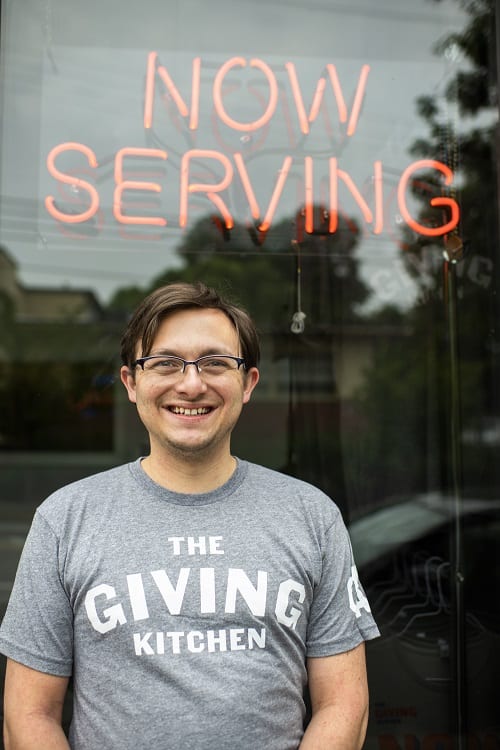 He applied to the Giving Kitchen, a unique Atlanta nonprofit that provides emergency aid to food service workers via financial grants and community resources. The Giving Kitchen covered Gibson’s rent and utilities during the six weeks he couldn’t work.

Now, as the Giving Kitchen’s program coordinator, he’s on the other side of those appeals for financial support. When Gibson isn’t linking clients to aid, he uses the organization’s many connections to recruit new resources. He also conducts statistical analysis and produces impact reports to find ways to increase the kitchen’s reach industry-wide.

“I have my dream job because I came into social work from a political science background,” said Gibson. “I’ve been afforded the opportunity to shape my job. I get to do research and statistics, which I love, and I also get to do casework.”

It isn’t the kind of career Gibson, a first-generation college student, had imagined for himself. Born in Atlanta and raised by his mother and grandmother — both Scottish immigrants — he was a competitive debater in high school and as an undergraduate at a local private university. After teaching debate for three years at Atlanta’s Pace Academy, Gibson set his sights on becoming a licensed social worker and performing clinical work. He loved working with adolescents and thought school counseling could be his calling.

Gibson enrolled in Georgia State’s Master of Social Work program in the Andrew Young School of Policy Studies, which focuses on educating leaders in community practice.

He realized through a series of Internships his potential for affecting the larger community. First, he trained homeless people in career readiness and helped them with job placements through a local ministry. Next, he performed research for the Georgia Capital Defenders Office, searching for circumstances that could potentially mitigate death penalty sentencing.

“I didn’t know social workers did this kind of thing,” he said. “When I realized we can do public policy and advocacy at this level, that macro practice can include data analysis, nonprofit management, leadership and community organizing, I knew it was a perfect fit for me.”

Gibson quickly recommended Giving Kitchen— the organization that had helped him.

He contacted Giving Kitchen’s director of programs Leah Melnick, who asked the group to do some impact reporting. From there, Gibson and his team of five other graduate students designed and conducted a series of qualitative interviews. Their work identified five major challenges food service workers face: economic self-sufficiency, depression, anxiety, pain and substance abuse.

Using the interview tool and responses, they created a psychometric battery of questions Giving Kitchen could use to improve its application process. Those questions formed the foundation for Giving Kitchen’s Question, Persuade and Refer (QPR) program, now used by the stability network staff to help clients work through adversity and depression.

“Thirteen percent of food service workers have felt suicidal, but it’s something else when they call to tell you why,” said Gibson. “Our program is considered the gold standard of suicide prevention training for restaurants and their workers.”

By January 2019, Gibson had become a permanent fixture in Giving Kitchen’s Edgewood Avenue office. Melnick had even created a job for him.

“There’s no other organization in the country like the Giving Kitchen,” he said.

The James Beard Foundation recognized Giving Kitchen’s unique approach this past spring, awarding the nonprofit its Humanitarian of the Year honor. The foundation cited the kitchen’s transformative QPR and stability network. As of May, Giving Kitchen had awarded more than $2.6 million in grants and additional stability network resources to more than 2,600 food service workers in a little more than five years.

Gibson has also tapped into the Andrew Young School’s community practice, this time as the client, to help a new team of social work students design and craft a marketing campaign to expand Giving Kitchen’s reach to food service workers throughout the state. The goal is to expand throughout the Southeast and nationally.