From Broad Street to Broadway

Natasha Davison’s (B.A. ‘93) journey from Georgia State to Broadway has been a 30-year whirlwind. On June 9, the “born performer” contended for her first Tony Award.

Most people would have been a bundle of nerves in advance of their first red carpet appearance. But Natasha Davison, who once danced to “Singin’ in the Rain” alongside Gene Kelly on an NBC television special, is no stranger to the bright lights and pageantry. 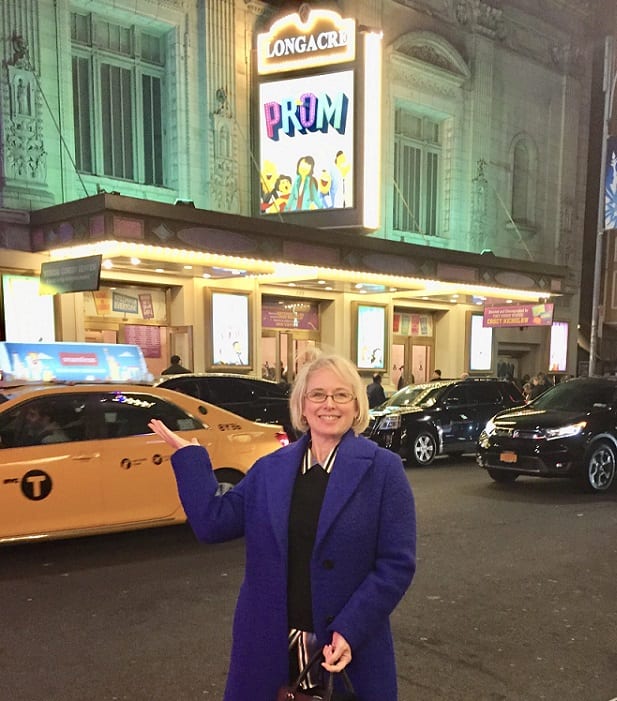 Natasha Davison (B.A. ‘93), co-producer of the musical “The Prom,” outside the Longacre Theatre in Times Square on opening night.

Davison is co-producer of “The Prom,” which opened on Broadway in November 2018. Based on true events, the show recently nabbed the Drama Desk Award for Best Musical and contended for Best Musical — for which Davison shared in the nomination— and six other titles at the 73rd Tony Awards.

That nomination (Davison’s first) is woven into a colorful career that took off at warp speed when she was in her late teens, just after enrolling at Georgia State.

She traces it all back to her first journalism class on the Atlanta Campus, which made her fall in love with storytelling.

Davison earned a National Academy of Arts and Sciences Student Emmy Award and scholarship, which included an internship at WSB-TV. The internship led to jobs in production assistance, writing and producing for one of the station’s news shows. In her early 20s, Davison was the only female line producer on her broadcast at  WSB-TV. She also earned a Georgia Associated Press award for her work.

During her senior year, Davison was invited to work in nationally syndicated programming. She left Georgia State just shy of graduating for Boston, where she spent a decade in broadcasting and media. Then the “lure of Broadway” as she describes it, overpowered her. Davison had grown up a patron of the arts, dancing ballet, playing the violin, singing and chasing musical theater.

“I was a born performer,” she said.

So, Davison ran off to New York city to dance on Broadway. Over 15 years on stage, she performed in national tours of shows such as “Cats” and abroad in productions such as “Beauty and the Beast” and “Joseph and the Amazing Technicolor Dreamcoat.” She also appeared on the TV series “Fame” and worked on projects with celebrities the likes of Liza Minnelli, Andrew Lloyd Webber and Debbie Allen. And though it came 13 years later than expected, she finished her degree at Georgia State, a feat she credits to the university’s unique flexibility with her full-time schedule.

Davison has spent the last decade teaching musical theater and production at the University of Texas at Austin while also traveling back and forth to the Big Apple to co-produce Broadway shows.

When the opportunity to sign on for “The Prom” presented itself, she didn’t hesitate. The narrative, which centers around a fictional town divided when two female students want to attend prom as each other’s dates, strikes a chord with Davison, who is determined to elevate on-screen and on-stage roles for women and underrepresented groups.

“The story features two female characters who have agency and solve their own problems,” Davison said. “They don’t need rescuing.”

“The Prom’s” groundbreaking themes have inspired game-changing performances, like at the 2018 Macy’s Thanksgiving Day Parade, when the cast performed the finale. It included the first same-sex kiss ever aired nationally on a family program.

Following a flurry of appearances on “The View,” “Good Morning America,” “The Late Show with Stephen Colbert” and more, Davison couldn’t have predicted the kind of success the musical has enjoyed. She’s grateful it’s created a larger conversation, one that asks us to acknowledge others’ differences and find common ground.

“The Prom,” which Davison likes to call “the little engine that could,” was up against stiff competition at Radio City Music Hall on June 9. And though it came up short against big-branded shows like “Hadestown” and “Tootsie,” Davison considered the opportunity to raise the musical’s profile in front of the Tony Awards’ national audience  invaluable.

“We need everyone to come see the show so that they understand different perspectives and see that everyone has a voice,” she said.